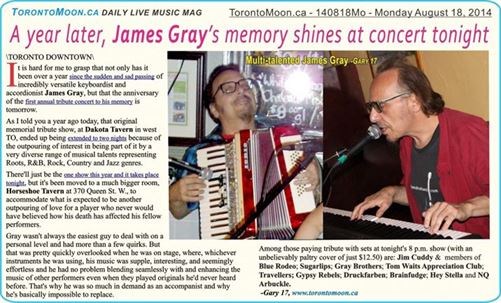 It is hard for me to grasp that not only has it been over a year since the sudden and sad passing of incredibly versatile keyboardist and accordionist James Gray, but that the anniversary of the first annual tribute concert to his memory is tomorrow.

As I told you a year ago today, that original memorial tribute show, at Dakota Tavern in west TO, ended up being extended to two nights because of the outpouring of interest in being part of it by a very diverse range of musical talents representing Roots, R&B, Rock, Country and Jazz genres.

There’ll just be the one show this year and it takes place tonight, but it’s been moved to a much bigger room, Horseshoe Tavern at 370 Queen St. W., to accommodate what is expected to be another outpouring of love for a player who never would have believed how his death has affected his fellow performers.

Gray wasn’t always the easiest guy to deal with on a personal level and had more than a few quirks. But that was pretty quickly overlooked when he was on stage, where, whichever instruments he was using, his music was supple, interesting, and seemingly effortless and he had no problem blending seamlessly with and enhancing the music of other performers even when they played originals he’d never heard before. That’s why he was so much in demand as an accompanist and why he’s basically impossible to replace.