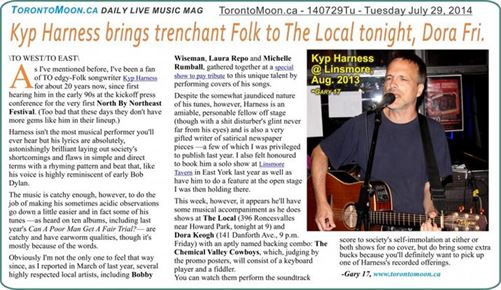 As I’ve mentioned before, I’ve been a fan of TO edgy-Folk songwriter Kyp Harness for about 20 years now, since first hearing him in the early 90s at the kickoff press conference for the very first North By Northeast Festival. (Too bad that these days they don’t have more gems like him in their lineup.)

Harness isn’t the most musical performer you’ll ever hear but his lyrics are absolutely, astonishingly brilliant laying out society’s shortcomings and flaws in simple and direct terms with a rhyming pattern and beat that, like his voice is highly reminiscent of early Bob Dylan.

The music is catchy enough, however, to do the job of making his sometimes acidic observations go down a little easier and in fact some of his tunes —as heard on ten albums, including last year’s Can A Poor Man Get A Fair Trial?— are catchy and have earworm qualities, though it’s mostly because of the words.

Obviously I’m not the only one to feel that way since, as I reported in March of last year, several highly respected local artists, including Bobby Wiseman, Laura Repo and Michelle Rumball, gathered together at a special show to pay tribute to this unique talent by performing covers of his songs.

Despite the somewhat jaundiced nature of his tunes, however, Harness is an amiable, personable fellow off stage (though with a shit disturber’s glint never far from his eyes) and is also a very gifted writer of satirical newspaper pieces —a few of which I was privileged to publish last year. I also felt honoured to book him a solo show at Linsmore Tavern in East York last year as well as have him to do a feature at the open stage I was then holding there.

This week, however, it appears he’ll have some musical accompaniment as he does shows at The Local (396 Roncesvalles near Howard Park, tonight at 9) and Dora Keogh (141 Danforth Ave., 9 p.m. Friday) with an aptly named backing combo: The Chemical Valley Cowboys, which, judging by the promo posters, will consist of a keyboard player and a fiddler.

You can watch them perform the soundtrack score to society’s self-immolation at either or both shows for no cover, but do bring some extra bucks because you’ll definitely want to pick up one of Harness’s recorded offerings.