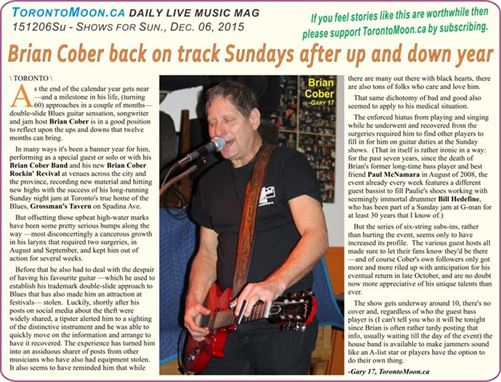 As the end of the calendar year gets near —and a milestone in his life, (turning 60) approaches in a couple of months— double-slide Blues guitar sensation, songwriter and jam host Brian Cober is in a good position to reflect upon the ups and downs that twelve months can bring.

In many ways it’s been a banner year for him, performing as a special guest or solo or with his Brian Cober Band and his new Brian Cober Rockin’ Revival at venues across the city and the province, recording new material and hitting new highs with the success of his long-running Sunday night jam at Toronto’s true home of the Blues, Grossman’s Tavern on Spadina Ave.

But offsetting those upbeat high-water marks have been some pretty serious bumps along the way —most disconcertingly a cancerous growth in his larynx that required two surgeries, in August and September, and kept him out of action for several weeks.

Before that he also had to deal with the despair of having his favourite guitar —which he used to establish his trademark double-slide approach to Blues that has also made him an attraction at festivals— stolen. Luckily, shortly after his posts on social media about the theft were widely shared, a tipster alerted him to a sighting of the distinctive instrument and he was able to quickly move on the information and arrange to have it recovered. The experience has turned him into an assiduous sharer of posts from other musicians who have also had equipment stolen. It also seems to have reminded him that while there are many out there with black hearts, there are also tons of folks who care and love him.

That same dichotomy of bad and good also seemed to apply to his medical situation.

The enforced hiatus from playing and singing while he underwent and recovered from the surgeries required him to find other players to fill in for him on guitar duties at the Sunday shows. (That in itself is rather ironic in a way: for the past seven years, since the death of Brian’s former long-time bass player and best friend Paul McNamara in August of 2008, the event already every week features a different guest bassist to fill Paulie’s shoes working with seemingly immortal drummer Bill Hedefine, who has been part of a Sunday jam at G-man for at least 30 years that I know of.)

But the series of six-string subs-ins, rather than hurting the event, seems only to have increased its profile. The various guest hosts all made sure to let their fans know they’d be there —and of course Cober’s own followers only got more and more riled up with anticipation for his eventual return in late October, and are no doubt now more appreciative of his unique talents than ever.

The show gets underway around 10, there’s no cover and, regardless of who the guest bass player is (I can’t tell you who it will be tonight since Brian is often rather tardy posting that info, usually waiting till the day of the event) the house band is available to make jammers sound like an A-list star or players have the option to do their own thing.