Musician, radio host and music promoter Zest learned first-hand touring northern Ontario and playing in bars how the impact of oppression of indigenous peoples affects everyday life.  And it’s that memory, combined with inspiration from a painting of the late Gord Downie and Chanie Wenjack by London, Ontario visual artist Cynthia Mackenzie, that prompted him to launch a Twitter information campaign with a difference.

For the month of November, Zest Radio Show on Twitter —a links-only vehicle that seeks to promote original music and musicians— has teamed up with Mackenzie to raise awareness of the issues raised on Downie’s 2016 album The Secret Path, which, based on a 1967 article by Ian Adams in Maclean’s magazine, tells the story of “The Lonely Death of Charlie Wenjack”.

Downie’s album and an accompanying graphic novel by Jeff Lemire tell the tragic story of 12-year-old native boy Chanie Wenjack (mis-named by his teachers as “Charlie”) whose body was found by railway tracks on October 22, 2021 near Redditt, Ontario, a week after he ran away from the Cecilia Jeffrey Indian Residential School in Kenora. 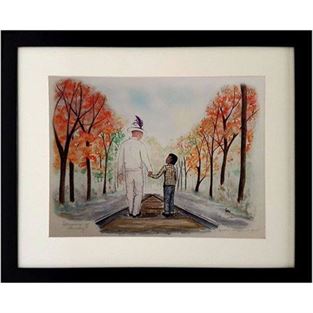 Gord’s brother Mike Downie made him aware of the 1967 magazine story in 2015 and the singer-songwriter was profoundly affected by it, writing ten poems which became the ten songs of the album and, in its wake, prompted establishment of the Gord Downie-Chanie Wenjack Fund by Gord and Mike in 2016.

This information campaign, which allows people to build a donation fund simply by retweeting and liking Twitter posts (Tweets), without having to pledge any money themselves, will also see one such Twitter supporter end up with a framed and signed print of Mackenzie’s painting, “Illusions of Someday,” which depicts Downie and Wenjack walking hand-in-hand along railway tracks.  The campaign has been fully endorsed by the Downie and Wenjack families and all proceeds go to the fund.

In the last months of his life Gord became increasingly insistent on the need for reconciliation and reparation due to the damage caused to native peoples by the federal government, churches and other institutions.  Speaking about “the Secret Path project” he told Maclean’s, as quoted in a tribute video to him posted by the magazine, that “if it’s the last thing I do, I’m happy.”

Downie’s public statements about the need for change in how indigenous people are treated and to repair some of the damage, along with encountering Mackenzie’s painting, reawakened memories in Zest from when he performed as a drummer in North Ontario bars and witnessed aboriginals segregated into a separate section, which he says he found odd at first.

“My most vivid memory was the division of rooms in a Hotel Bar in Parry Sound called The Kipling.  I looked out from behind my drum kit to see two rooms.  The room on the left was a pool/billiards room filled with aboriginal people and the rest of the bar a second open room with the other townspeople in attendance. I was perplexed at why there was such division … why weren’t these people mingling together?  I soon found reality of a divide that I have never witnessed before. It struck my heart deeply … I walked off of that stage a changed person,” Zest told TorontoMoon.ca.

[On a personal note, Zest’s account accords completely with my own memories of working briefly as a waiter in a bar in London, Ontario, where there was a small but close-knit indigenous population drawn from nearby tobacco farms and native communities. The Blue Boot was similarly split into two areas, a main open room at the front and in the back a raised section with a short bannister on either side of the steps up to it. I regularly served “the Indian section” and found them friendly and reasonably decent tippers and most of the time the bar was peaceable in its two solitudes. But occasionally trouble would erupt —usually arising in the bathrooms that everyone used— and when that happened, when there was a dispute between a white and a native, all hell quickly broke loose and what was basically a race riot broke out.  The natives would throw their quart bottles from on high into the larger room where they landed explosively and I quickly learned, after nearly getting clobbered by one of the “glass tomahawks” when trying to break up an inter-racial scuffle, that there was nothing for it except to take cover behind the bar or under a table and wait for things to subside. Scary. And all basically stemming from the enforced segregation that was the bar’s policy.]Things have changed for the better a little bit since then —with at least finally some acknowledgement of the injustices perpetrated on aboriginal peoples in Canada. But in many places the abuse continues and communities such as Grassy Narrows continue to be devastated by lack of resolve to fix things.

The Downie-Wenjack fund, a project on the Tides Canada Shared Service Platform, is aimed at raising money to “continue the conversation that began with Chanie Wenjack’s residential school story, and to aid our collective reconciliation journey through a combination of awareness, education and action,” the fund’s website states.

The way the Zest/Mackenzie Twitter campaign works, Zest explained, is that “for every Twitter account that either Retweets or Likes any of the tweets that are part of the information campaign, $1 CDN, up to a maximum of $500, will be donated to the Downie-Wenjack fund by Zest Radio Show and Cynthia Mackenzie on the Twitter participant’s behalf because the people that Tweet or Like these Tweets “Did Something”.  In honouring Gord Downie’s path, he asked that Canadians #DoSomething to bring awareness to this important issue.  And the people that do Retweet or Like these Tweets are also automatically entered into a contest to win the print, which Mackenzie is donating as an added bonus in the campaign.  When the campaign concludes on November 30, the list of participants will be sent to Cynthia, and she will choose the person that will receive her framed, specially notated and signed print.

You can learn more by checking out the Zest Radio Show (since 2009 a broadcast utilizing links to streaming audio, video and other mediums of digital artistry to promote music and art, after airing on 89.9 FM Radio Glendon at Glendon Campus of York University, Toronto, Canada from 2004-08) by visiting the Twitter accounts of Zest Radio Show  https://twitter.com/ZestRadioShow or Cynthia Mackenzie https://twitter.com/cynthiamacart.

Links there will take you to other tweets by Mackenzie and Zest, all of which are eligible to add $1 to the donation and give you a chance to win the print.

In doing this, #DoSomething activity, you shall be honouring Gord Downie’s path and also honouring the memory of Chanie Wenjack.