It’s not because neither the Rock band Lefty And The Goons nor the Cock & Pheasant bar in Streetsville is a supporting subscriber to TorontoMoon.ca that we are refusing to include the listing of the former’s show at the latter’s venue tonight. It’s because the club —hopefully unbeknownst to the Lefty crew, which pretty much keeps to its own little social swirl— two weeks ago ripped off a band that contains two of my subscribers, prompting, on our subscribers’ Facebook group and elsewhere, an outpouring of bad experiences with the room from a number of other players —including several other subscribers.

This room —let me repeat their name: The Cock & Pheasant in Streetsville— will not have any of its shows listed ever until we can know with certainty that it has a new owner. This room is so incompetent or insouciant that it tells a band already set up and performing that because of the low revenue it can’t afford to pay them what was agreed and expects the bands to bring the crowd —while not even bothering to list any entertainment on its website or social media that we have been able to find.

Maybe Lefty will have a great show tonight and get paid what they expect and everyone will be happy. But based on the experiences of several talented, hard-working and promotion/community oriented performers I’ve heard from, they’ll be lucky to walk out with 10% of the gross bar take, so probably less than $200. And based on at least one band’s experience, they may just get told to go home after the first set with no pay at all.

I choose to believe that Lefty band members Angie Sandow and Lloyd Walsh didn’t know that the club has a reputation of ripping off bands when they booked the gig. Had they been subscribers, of course, I would have alerted them to the possibility of a problem as soon as I learned about the show, as I’ve done with several other folks (and also in cases where I become aware of double-bookings, saving a lot of people a lot of heartache and wasted effort/expense); though usually I do so privately, rather than in such a public manner as I’m bringing this disaster-in-waiting to light.

It’s shows like this one that underline to me why it is important that more people support what I am doing with TorontoMoon.ca. While yes, I’m earning some income from it (far short of what I would need to make a living only doing this or what the hours would net doing other things) this project is really all about promoting and nourishing the local live music scene, about helping the music community to be more aware of itself.

While yes, Facebook and other social media has a hugely beneficial role to play in “getting the word out,” the problem with relying solely on that is that things get lost in a jumble —and if you take any time off at all you’re going to miss a whole lot of important stuff you need to know about. I’m friends with the Lefty folks on Facebook and possibly so are some of the other players jerked over by this club —but because of the algorithms used, that didn’t help save them from playing a gig that may well end in anger and disappointment but that at the very least will earn them scorn from other players they know, who will be offended by them playing such a shit hole.

Being part of the TorontoMoon.ca community can help to connect people in a meaningful way that benefits everyone. That was the original concept back in 1992 when I started it (24 years ago!) as The Open Season until 1993, then to-nite till 2009 and subsequently Toronto Moon.

The original concept was born way before the ascendance of the internet, which has changed things in many respects but hasn’t really, after all is said and done, replaced or usurped the need for a news/information source that is comprehensive, credible, consistent, archived and searchable. It’s not rocket science. And it’s way past time that some slow learners caught on.

The reason why, after 16 years as an ad-supported publication, in 2008 I switched to a subscriber-funded model is that it’s the only way that we can “tell it like it is” (or at least as we see it) without fear or favour —even if from time to time some subscribers may have their nose put out of joint when we share uncomfortable observations. And internet or not, there’s no one else paying as much attention to this scene as we do and have for 24 years now.

If you’re satisfied with a jumble of Twits, FacePosts, Instagrabs and Tumbles as your information source about the industry and community that you call home, then just don’t be surprised when out of the blue someone rises up and slams you because you walked into a hornets nest that you were completely unaware of. 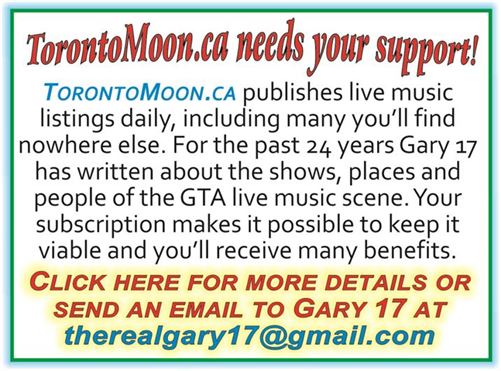 10> The Gormley Brothers @ Bier Markt Esplanade, 58 The Esplanade, TO