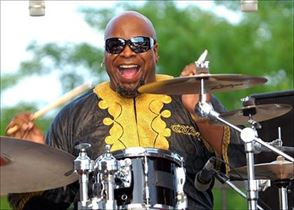 Drummer to the world and TO’s epitome of the “Fatback Beat,” Shamakah Ali has one of the most impressive musical resumes of anyone on the local scene and with his high-energy playing and hearty persona comes across as someone invulnerable to the ravages of time.

But like all of us he’s only human after all, and lately the big, boisterous and teddy bear affable accompanist to international stars and local performers alike has been suffering from a heart condition that had him hospitalized recently since early February.

So tonight the members of one of his current bands, Signe Miranda’s Veranda, are staging a benefit for him at cozy Parkdale venue Not My Dog from 10 p.m. till close.

Born in Memphis, Ali’s genuine musical Blues roots are as legitimate as they get: he grew up playing on Beale Street in W. C. Handy Park, named after the seminal Blues man who also bequeathed his name to the acclaimed W. C. Handy Awards.

Even a partial list of the iconic American artists he’s recorded, toured and performed with, both south of the border and as far afield as Korea, is astonishing: Albert King, Al Green, Chaka Khan. George Clinton and Lionel Ritchie among others.

I first met Shamakah when he was anchoring an all-star R&B troupe known as The A Team, which over a period of several years in the last decade was one of the staple acts at highly respected Orbit Room.  As we told you three years ago, he also started up the Flash Back Reggae band and has infused the music of innumerable local combos before and since.  The credibility of his self-described “Fatback Beat” presence is enough for many savvy music fans to guarantee they’re going to see a world class show.

Anyone who’s seen him perform might have a hard time believing it, but Ali’s heart problems actually go back 18 years, he recounted on a GoFundMe.com campaign that, since being created on Feb. 18, so far has raised over $22,000 toward covering recent surgery and hospital bills for the U.S. ex-pat, who is apparently not eligible for OHIP coverage.

Tonight’s show in the small venue at 1510 Queen St. West isn’t likely to add a lot to that total but it will be a good opportunity for fans, friends and others to extend their good wishes to him, since, backing Miranda along with Peter Nunn on keys, Brian Allossery on guitar, Rob Brown on bass and special guests Sonja Seiler and Marcus Walker, Ali is listed as the drummer for the gig.