For Jim Cornell, it’s Still Sunday no matter what the calendar says 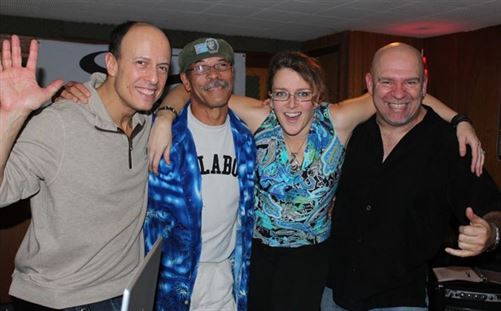 The rest of the faces in the band may have changed but to founder and guitarist-singer and songwriter Jim Cornell, it’s Still Sunday.

Cornell unveils the all-new lineup for his Rock group this Saturday, December 7, at a show in the room that’s become his go-to venue over the past year: The Loaded Dog at 1921 Lawrence Ave. E. in Scarborough. I had the pleasure of catching a sneak-peek performance by the new group at a private party Cornell and wife Lori put on for Lori’s mother, poet Kitty Bromley, to celebrate her 90th birthday early in November and got to know the new band members a little as well.

Like Cornell, all of the other players are not only versatile but experienced veteran musicians equally comfortable playing hard-edged Rock, softer Adult Contemporary or even Blues tunes and rendering them authentically.

Drummer Dale Bradshaw is a longtime acquaintance of Cornell’s, and “one of the first drummers I every performed with, back in a band called Raising Cain,” Cornell recalled in a conversation I held with the band during a break in the action at his home, where the surprise party for Kitty was held. (Cornell has a pro-level studio and rehearsal setup in his basement, where the group has been working out its chops and moves for the past several weeks.)

Cornell, a pretty fair drummer himself who recently was on the kit for the Tommy Rocker Classic Rock Show band (but no longer, since a shoulder complaint that, while not affecting his six-string action, makes it impossible to do a full night of skins beating) has the highest praise for Bradshaw and said he’s “thrilled to have him in the new lineup.”

It was Bradshaw who recruited the new bassist, Amazon-tall and imposingly talented Robin Latimer, whose background includes, in addition to Rock bands, in which she’d played many moons ago with Bradshaw, long stints as a Funk Fusion bassist and extensive involvement in a Latin Jazz combo, playing a lot of stand-up acoustic bass as well as the electric variety.

“I’d sort of drifted apart from Dale and others on that scene,” Latimer recalled in the interview. “Then I got to a point last year where I just wanted a break from playing for a while.

“But then I started to miss it and I particularly wanted to get back to playing the electric. I actually wanted to reconnect with Dale but couldn’t find a way to get in touch with him no matter how hard I tried,” she recalled.

Meanwhile Bradshaw, who’d told Cornell “I know a girl who’d be the perfect fit for this band on bass,” was also trying frantically to get in touch with her, since his experiences in the bands with her in the past made her his number one choice.

Then Latimer, who’d given up trying to find him, ended up “having two dreams in five nights about reconnecting with Dale. After the second one, the next morning I thought, ‘Ok, I’ve got to give it one more try’ so I went to my computer to do another search and I couldn’t believe my eyes: there was an email from him —he’d managed to get my email address from a friend— asking me to get it touch!” Obviously, that pairing was meant to be.

With the group’s keyboardist, energetic and dynamic Jerry Gasee, who’d also played with bands in a wide range of styles including indie groups, the route to Sunday was quite different. He answered an ad for auditions that Cornell had posted online. But the synergy was immediate.

“I like the fact that Jim wants us to put our own interpretation on the covers,” he said. “And I’m very excited that he wants to focus on original material as well. I really look forward to rehearsing and I even actually enjoy doing my ‘homework’ for this group,” he said.

Cornell, who has an album’s worth of material already penned and is continuing to write new material, is adamant in describing Still Sunday as “not a covers band that does a few originals but an original band that also does kick-ass covers.”

And that they do. After ripping through tunes like “Fly Like An Eagle”, “Gimme Good Lovin’” and “Comfortably Numb” the group abruptly switches the pace to Cornell’s soulful, spellbinding take on “The Thrill Is Gone”, all done with precision, adding some original flourishes on solos. Even with the occasional ad hoc improvisations, the band rarely falters —and in the rare moments when someone misses a cue they smile, shrug and “play it off” to borrow a metaphor from the sports world.

Cornell’s originals, songs like “Blues Boy” and “Wishing You Were Here”, are expertly crafted pieces delivered with passion and aplomb that, when he’s done them with previous versions of the band, have been starting to elicit fan requests when they perform.

At the December 7 formal debut show (they also did a pre-unveiling set Nov. 30 for a CP24 Children’s Wish Christmas Fundraiser at McGradies Pub) they’ll also bulk up the show with an opening set by guitarist-singer Dan McLean Jr. and an appearance by violinist Victoria Yeh. There’s no cover and the group will take to the club’s large, well appointed stage, with an expansive dance floor in front, as soon as the Leafs game is done.