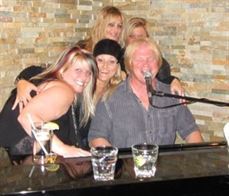 The Durham Region Music Society has posted a $1,000 reward for information leading to the return of several valuable items, including musical equipment specifically designed to assist a sightless person, after the home of Oshawa keyboardist and vocalist Eric Lambier was burglarized while he performed at a gig the night of Friday March 28.

The items taken included a MacBook pro, microphones and, Lambier wrote in a post on his Facebook page, “several other things that are basically my life.”

Since, as Lambier noted, “after insurance limitations and deductibles it probably won’t even be worth claiming,” the DRMS has also decided to hold a fundraiser for the performer, who works as a sideman for various bands and also does a solo Elton John tribute act.

DRMS executive Howard Ross said on his Facebook page that a date for the event will be announced soon and that people interested in helping can call him at 647-532-4050.

-Gary 17, www.torontomoon.ca (Thanks to Nenah Bambina Barkley for making us aware of this situation)