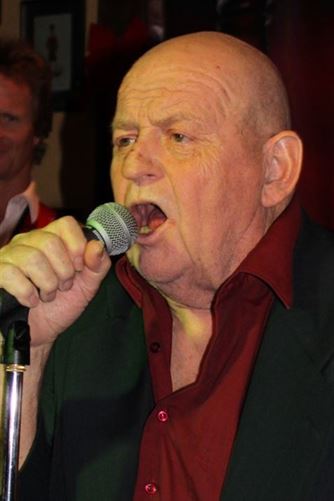 The family of one of the GTA’s most loved and most enduring and engaging singers spent the Christmas holiday coping with his unexpected death Monday.

Mary Armstrong, wife of Buddy “The Bear” Armstrong, who died of heart failure at 66 years of age while undergoing a routine medical procedure on Mon., Dec. 22, raised four children with the chubby, amiable R&B/Rock/Blues singer with whom she’s lived for the past 35 years.

“It’s so strange,” she said, “that just as my life was about to start again his is now over, with no overlap, no time to adjust to anything.”

Mary has been planning to return to work at the TTC after a seven year absence following two assaults against her while on the job, but expected Bear would be home from hospital when she resumed her duties as a fare collector. She has been taking the required courses to update her qualifications with the understanding that she’d return to work in January but has been somewhat nervous about returning to the job, she said. Without Bear as a moral support, that’s going to be even more difficult.

Buddy suffered a heart attack Monday morning while undergoing dialysis at Credit Valley Hospital, where he’d been a patient for the past four months as doctors performed a series of amputations on a leg in an attempt to control a life-threatening circulation problem created by diabetes, with which he was diagnosed nearly 20 years ago.

“He was doing so well,” Mary said wistfully. “The final amputation was the magic bullet that finally solved the circulation problem (after amputations of toes and the foot didn’t accomplished the desired result) and everything was healing up fine and he was in really good spirits, with no pain, and doing everything they told him to do at rehab.

“But I guess the strain of all the different things just finally was too much for his heart. He didn’t have a weak heart or anything but I guess in the end it was just all too much.

“But it really was completely unexpected. He was looking forward to getting out of the hospital and being at home and resuming performing. But at least there was no pain or suffering, he went peacefully.”

Bear had been undergoing thrice-weekly dialysis treatments for several years and had been in an out of hospital, where he’d become “part of the family” to the nurses and technicians for the past few.

“But he sure surprised the doctors, who told him over 15 years ago when he was diagnosed with the diabetes that he’d probably only have 7 or so years left to live,” she said. “He did pretty good all things considered.”

While for the past few months he hadn’t been able to perform at the weekly Saturday matinee show he started three years ago with his band at Southside Johnny’s, even during his previous medical difficulties he made a huge effort to be there, “because it was what he loved to do, what he looked forward to all week.”

Mary recounted how, for Bear to do an appearance for just one set as part of the 4-8 show, which was all his health permitted, “it was actually a five or six-hour thing. Between getting dressed and arranging a Wheel-Trans ride there and everything else, it was quite the ordeal really.

“But it didn’t bother him –I once asked him ‘Don’t you find it tiring?’ but he said it was worth it, because that’s who he was, that’s what he lived for.”

Mary said the family would hold a small, private funeral next week, but would like to stage a Saturday memorial/tribute show for him at Southside Johnny’s in late January or early February.

Ironically, it had already been decided over a week ago that there wouldn’t be a show taking place December 27 due to the holidays, but club owner John Theodore said he expects the band will continue on in January much as it has during Bear’s absence the past few months with a series of special guests. He’s willing to arrange the club’s schedule to accommodate the tribute to Bear, “one of the old-school originals we all loved,” he said.

Over a long career Bear performed with a multitude of musicians, high-profile and unknown alike, in various bands and venues across the GTA as well as at jams, which he sometimes hosted. It was twenty years ago while he was doing a weekly Sunday evening show at Toozers, as Southside Johnny’s was known then, that I first met him and we instantly bonded.

He’s genial demeanour, with a wickedly laid-back sense of humour, his understanding of human nature that extended to the highest and the lowest of social strata and his generous, welcoming and fun-loving disposition made him a favourite not only with audiences but with his fellow performers and others he dealt with. Then there was that voice, by turns honey sweet and growly formidable, and of course a boyish smile that made him look, despite what you may have known about his past, positively angelic.

Bear loved the magazine I had just started and became an advocate for it and soon an advertiser, then, after we switched to the reader-subscription program, a faithful subscriber whether he was working a lot or hardly at all.

It was memories of those Sunday matinees that prompted me, (after reconfirming he still had the chops despite his various medical woes by going to see him perform in December of 2011) to recommend him for the Saturday slot at Southside, where John was wanting to start up a Sat. matinée show in the spring of 2012 but hadn’t found the right host. John took my advice and the rest is, as they say, history. [See the video I shot of Bear performing “Knock On Wood” at the 2011 performance on the TorontoMoonTV channel on YouTube at: https://www.youtube.com/watch?v=RAyb3JTR27s&list=UUAGqbu8YyatxAyh5JxgHgVw ]

In addition to Mary, Bear leaves four children (Justin from his first marriage and Mary’s children by her first marriage, Melanie, Danielle and Ryan) as well as grandchildren and a four-year-old great-grandaughter, Ashley, “who was the light of his life since she was born,” Mary said.