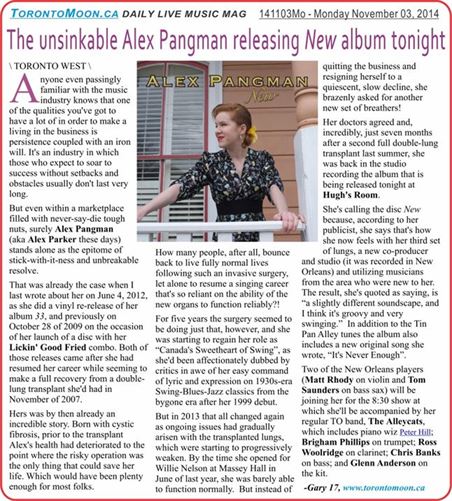 Anyone even passingly familiar with the music industry knows that one of the qualities you’ve got to have a lot of in order to make a living in the business is persistence coupled with an iron will. It’s an industry in which those who expect to soar to success without setbacks and obstacles usually don’t last very long.

But even within a marketplace filled with never-say-die tough nuts, surely Alex Pangman (aka Alex Parker these days) stands alone as the epitome of stick-with-it-ness and unbreakable resolve.

That was already the case when I last wrote about her on June 4, 2012, as she did a vinyl re-release of her album 33, and previously on October 28 of 2009 on the occasion of her launch of a disc with her Lickin’ Good Fried combo. Both of those releases came after she had resumed her career while seeming to make a full recovery from a double-lung transplant she’d had in November of 2008.

Hers was by then already an incredible story. Born with cystic fibrosis, prior to the transplant Alex’s health had deteriorated to the point where the risky operation was the only thing that could save her life. Which would have been plenty enough for most folks.

How many people, after all, bounce back to live fully normal lives following such an invasive surgery, let alone to resume a singing career that’s so reliant on the ability of the new organs to function reliably?!

For five years the surgery seemed to be doing just that, however, and she was starting to regain her role as “Canada’s Sweetheart of Swing”, as she’d been affectionately dubbed by critics in awe of her easy command of lyric and expression on 1930s-era Swing-Blues-Jazz classics from the bygone era after her 1999 debut.

But in 2013 that all changed again as ongoing issues had gradually arisen with the transplanted lungs, which were starting to progressively weaken. By the time she opened for Willie Nelson at Massey Hall in June of last year, she was barely able to function normally.  But instead of quitting the business and resigning herself to a quiescent, slow decline, she brazenly asked for another new set of breathers!

Her doctors agreed and, incredibly, just seven months after a second full double-lung transplant last summer, she was back in the studio recording the album that is being released tonight at Hugh’s Room.

She’s calling the disc New because, according to her publicist, she says that’s how she now feels with her third set of lungs, a new co-producer and studio (it was recorded in New Orleans) and utilizing musicians from the area who were new to her. The result, she’s quoted as saying, is a slightly different soundscape, and I think it’s groovy and very swinging.”  In addition to the Tin Pan Alley tunes, the album also includes a new original song she wrote, “It’s Never Enough”.

Two of the New Orleans players (Matt Rhody on violin and Tom Saunders on bass sax) will be joining her for the 8:30 show at which she’ll be accompanied by her regular TO band, The Alleycats, which includes piano wiz Peter Hill; Brigham Phillips on trumpet; Ross Woolridge on clarinet; Chris Banks on bass; and Glenn Anderson on the kit.