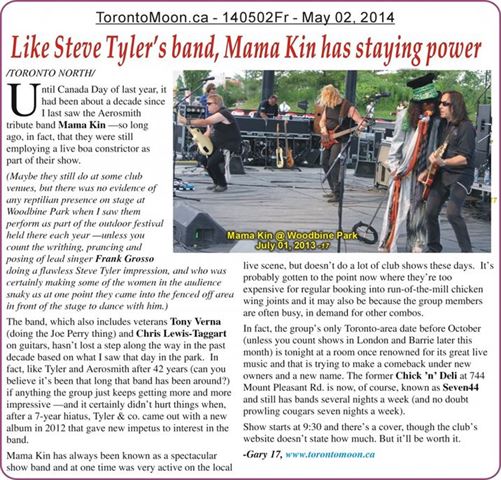 /TORONTO NORTH/ Until Canada Day of last year, it had been about a decade since I last saw the Aerosmith tribute band Mama Kin –so long ago, in fact, that they were still employing a live boa constrictor as part of their show. 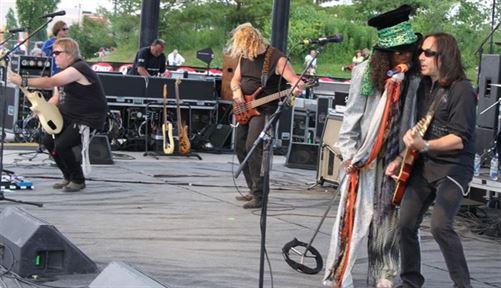 (Maybe they still do at some club venues, but there was no evidence of any reptilian presence on stage at Woodbine Park when I saw them perform as part of the outdoor festival held there each year –unless you count the writhing, prancing and posing of lead singer Frank Grosso doing a flawless Steve Tyler impression, and who was certainly making some of the women in the audience snaky as at one point they came into the fenced off area in front of the stage to dance with him.)

The band, which also includes veterans Tony Verna (doing the Joe Perry thing) and Chris Lewis-Taggart on guitars, hasn’t lost a step along the way in the past decade based on what I saw that day in the park.  In fact, like Tyler and Aerosmith after 42 years (can you believe it’s been that long that band has been around?) if anything the group just keeps getting more and more impressive –and it certainly didn’t hurt things when, after a 7-year hiatus, Tyler & co. came out with a new album in 2012 that gave new impetus to interest in the band.

Mama Kin has always been known as a spectacular show band and at one time was very active on the local live scene, but doesn’t do a lot of club shows these days. It’s probably gotten to the point now where they’re too expensive for regular booking into run-of-the-mill chicken wing joints and it also may be because the group members are often busy, in demand for other combos.

In fact, the group’s only Toronto-area date before October (unless you count shows in London and Barrie later this month) is tonight at a room once renowned for its great live music and that is trying to make a comeback under new owners and a new name. The former Chick ‘n’ Deli at 744 Mount Pleasant Rd. is now, of course, known as Seven44 and still has bands several nights a week (and no doubt prowling cougars seven nights a week).

Show starts at 9:30 and there’s a cover, though the club’s website doesn’t state how much. But it’ll be worth it. -Gary 17, www.torontomoon.ca