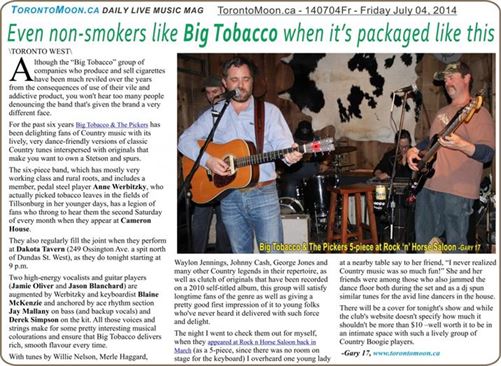 Although the “Big Tobacco” group of companies who produce and sell cigarettes have been much reviled over the years from the consequences of use of their vile and addictive product, you won’t hear too many people denouncing the band that’s given the brand a very different face.

For the past six years Big Tobacco & The Pickers has been delighting fans of Country music with its lively, very dance-friendly versions of classic Country tunes interspersed with originals that make you want to own a Stetson and spurs.

The six-piece band, which has mostly very working class and rural roots, and includes a member, pedal steel player Anne Werbitzky, who actually picked tobacco leaves in the fields of Tillsonburg in her younger days, has a legion of fans who throng to hear them the second Saturday of every month when they appear at Cameron House.

They also regularly fill the joint when they perform at Dakota Tavern (249 Ossington Ave. a spit north of Dundas St. West), as they do tonight starting at 9 p.m.

Two high-energy vocalists and guitar players (Jamie Oliver and Jason Blanchard) are augmented by Werbitzky and keyboardist Blaine McKenzie and anchored by ace rhythm section Jay Mallany on bass (and backup vocals) and Derek Simpson on the kit. All those voices and strings make for some pretty interesting musical colourations and ensure that Big Tobacco delivers rich, smooth flavour every time.

With tunes by Willie Nelson, Merle Haggard, Waylon Jennings, Johnny Cash, George Jones and many other Country legends in their repertoire, as well as clutch of originals that have been recorded on a 2010 self-titled album, this group will satisfy longtime fans of the genre as well as giving a pretty good first impression of it to young folks who’ve never heard it delivered with such force and delight.

The night I went to check them out for myself, when they appeared at Rock ‘n’ Horse Saloon back in March (as a 5-piece, since there was no room on stage for the keyboard) I overheard one young lady at a nearby table say to her friend, “I never realized Country music was so much fun!” She and her friends were among those who also jammed the dance floor both during the set and as a dj spun similar tunes for the avid line dancers in the house.

There will be a cover for tonight’s show and while the club’s website doesn’t specify how much it shouldn’t be more than $10 –well worth it to be in an intimate space with such a lively group of Country Boogie players.