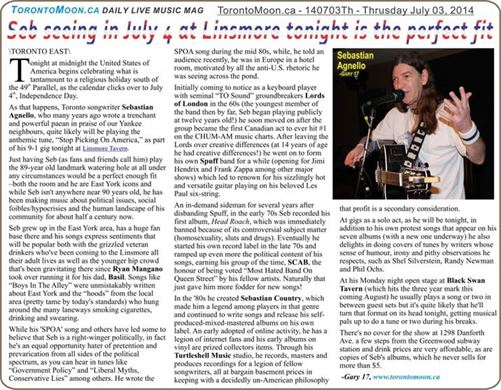 Tonight at midnight the United States begins celebrating what is tantamount to a religious holiday south of the 49th Parallel, as the calendar clicks over to July 4th, Independence Day.

As that happens, Toronto songwriter Sebastian Agnello, who many years ago wrote a trenchant and powerful paean in praise of our Yankee neighbours, quite likely will be playing the anthemic tune, “Stop Picking On America,” as part of his 9-1 gig tonight at Linsmore Tavern.

Just having Seb (as fans and friends call him) play the 89-year old landmark watering hole at all under any circumstances would be a perfect enough fit –both the room and he are East York icons and while Seb isn’t anywhere near 90 years old, he has been making music about political issues, social foibles/hypocrisies and the human landscape of his community for about half a century now.

Seb grew up in the East York area, has a huge fan base there and his songs express sentiments that will be popular both with the grizzled veteran drinkers who’ve been coming to the Linsmore all their adult lives as well as the younger hip crowd that’s been gravitating there since Ryan Mangano took over running it for his dad, Basil. Songs like “Boys In The Alley” were unmistakably written about East York and the “hoods” from the local area (pretty tame by today’s standards) who hung around the many laneways smoking cigarettes, drinking and swearing.

While his ‘SPOA’ song and others have led some to believe that Seb is a right-winger politically, in fact he’s an equal opportunity hater of pretention and prevarication from all sides of the political spectrum, as you can hear in tunes like “Government Policy” and “Liberal Myths, Conservative Lies” among others. He wrote the SPOA song during the mid 80s, while, he told an audience recently, he was in Europe in a hotel room, motivated by all the anti-U.S. rhetoric he was seeing across the pond.

Initially coming to notice as a keyboard player with seminal “TO Sound” groundbreakers Lords of London in the 60s (the youngest member of the band then by far, Seb began playing publicly at twelve years old!) he soon moved on after the group became the first Canadian act to ever hit #1 on the CHUM-AM music charts. After leaving the Lords over creative differences (at 14 years of age he had creative differences!) he went on to form his own Spuff band for a while (opening for Jimi Hendrix and Frank Zappa among other major shows) which led to renown for his sizzlingly hot and versatile guitar playing on his beloved Les Paul six-string.

An in-demand sideman for several years after disbanding Spuff, in the early 70s Seb recorded his first album, Head Roach, which was immediately banned because of its controversial subject matter (homosexuality, sluts and drugs). Eventually he started his own record label in the late 70s and ramped up even more the political content of his songs, earning his group of the time, SCAB, the honour of being voted “Most Hated Band On Queen Street” by his fellow artists. Naturally that just gave him more fodder for new songs!

In the ‘80s he created Sebastian Country, which made him a legend among players in that genre and continued to write songs and release his self-produced-mixed-mastered albums on his own label. Through his Turtleshell Music studio, he records, masters and produces recordings for a legion of fellow songwriters, all at bargain basement prices in keeping with a decidedly un-American philosophy that profit is a secondary consideration.

At gigs as a solo act, as he will be tonight, in addition to his own protest songs that appear on his seven albums (with a new one underway) he also delights in doing covers of tunes by writers whose sense of humour, irony and pithy observations he respects, such as Shel Silverstein, Randy Newman and Phil Ochs.

At his Monday night open stage at Black Swan Tavern (which hits the three year mark this coming August) he usually plays a song or two in between guest sets but it’s quite likely that he’ll turn that format on its head tonight, getting musical pals up to do a tune or two during his breaks.

There’s no cover for the show at 1298 Danforth Ave. a few steps from the Greenwood subway station and drink prices are very affordable, as are copies of Seb’s albums, which he never sells for more than $5.