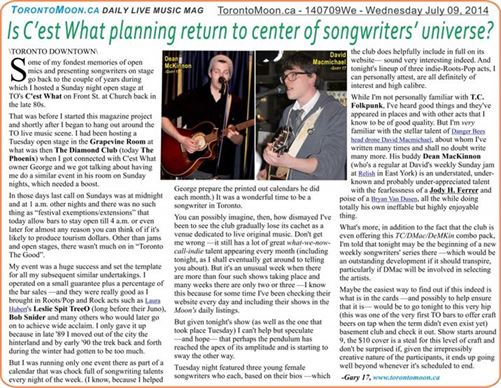 Is C’est What planning return to center of songwriters’ universe?

Some of my fondest memories of open mics and presenting songwriters on stage go back to the couple of years during which I hosted a Sunday night open stage at TO’s C’est What on Front St. at Church back in the late 80s.

That was before I started this magazine project and shortly after I began to hang out around the TO live music scene. I had been hosting a Tuesday open stage in the Grapevine Room at what was then The Diamond Club (today The Phoenix) when I got connected with C’est What owner George and we got talking about having me do a similar event in his room on Sunday nights, which needed a boost.

In those days last call on Sundays was at midnight and at 1 a.m. other nights and there was no such thing as “festival exemptions/extensions” that today allow bars to stay open till 4 a.m. or even later for almost any reason you can think of if it’s likely to produce tourism dollars. Other than jams and open stages, there wasn’t much on in “Toronto The Good”.

My event was a huge success and set the template for all my subsequent similar undertakings. I operated on a small guarantee plus a percentage of the bar sales —and they were really good as I brought in Roots/Pop and Rock acts such as Laura Hubert’s Leslie Spit TreeO (long before their Juno), Bob Snider and many others who would later go on to achieve wide acclaim. I only gave it up because in late ’89 I moved out of the city the hinterland and by early ’90 the trek back and forth during the winter had gotten to be too much.

But I was running only one event there as part of a calendar that was chock full of songwriting talents every night of the week. (I know, because I helped George prepare the printed out calendars he did each month.) It was a wonderful time to be a songwriter in Toronto.

You can possibly imagine, then, how dismayed I’ve been to see the club gradually lose its cachet as a venue dedicated to live original music. Don’t get me wrong —it still has a lot of great what-we-now-call-indie talent appearing every month (including tonight, as I shall eventually get around to telling you about). But it’s an unusual week when there are more than four such shows taking place and many weeks there are only two or three —I know this because for some time I’ve been checking their website every day and including their shows in the Moon’s daily listings.

But given tonight’s show (as well as the one that took place Tuesday) I can’t help but speculate —and hope— that perhaps the pendulum has reached the apex of its amplitude and is starting to sway the other way.

Tuesday night featured three young female songwriters who each, based on their bios —which the club does helpfully include in full on its website— sound very interesting indeed. And tonight’s lineup of three indie-Roots-Pop acts, I can personally attest, are all definitely of interest and high calibre.

While I’m not personally familiar with T.C. Folkpunk, I’ve heard good things and they’ve appeared in places and with other acts that I know to be of good quality. But I’m very familiar with the stellar talent of Danger Bees head drone David Macmichael, about whom I’ve written many times and shall no doubt write many more. His buddy Dean MacKinnon (who’s a regular at David’s weekly Sunday jam at Relish in East York) is an understated, under-known and probably under-appreciated talent with the fearlessness of a Jody H. Ferrer and poise of a Bryan Van Dusen, all the while doing totally his own ineffable but highly enjoyable thing.

What’s more, in addition to the fact that the club is even offering this TC/DMac/DeMKin combo pack, I’m told that tonight may be the beginning of a new weekly songwriters’ series there —which would be an outstanding development if it should transpire, particularly if DMac will be involved in selecting the artists.

Maybe the easiest way to find out if this indeed is what is in the cards —and possibly to help ensure that it is— would be to go tonight to this very hip (this was one of the very first TO bars to offer craft beers on tap when the term didn’t even exist yet) basement club and check it out. Show starts around 9, the $10 cover is a steal for this level of craft and don’t be surprised if, given the irrepressibly creative nature of the participants, it ends up going well beyond whenever it’s scheduled to end.