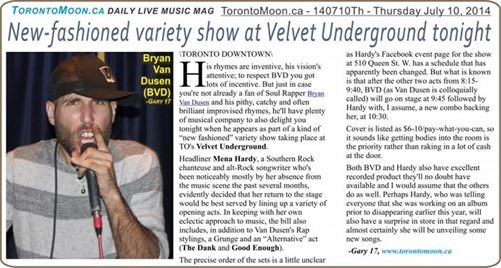 His rhymes are inventive, his vision’s attentive; to respect BVD you got lots of incentive. But just in case you’re not already a fan of Soul Rapper Bryan Van Dusen and his pithy, catchy and often brilliant improvised rhymes, he’ll have plenty of musical company to also delight you tonight when he appears as part of a kind of “new fashioned” variety show taking place at TO’s Velvet Underground.

Headliner Mena Hardy, a Southern Rock chanteuse and alt-Rock songwriter who’s been noticeably mostly by her absence from the music scene the past several months, evidently decided that her return to the stage would be best served by lining up a variety of opening acts. In keeping with her own eclectic approach to music, the bill also includes, in addition to Van Dusen’s Rap stylings, a Grunge and an “Alternative” act (The Dank and Good Enough).

The precise order of the sets is a little unclear as Hardy’s Facebook event page for the show at 510 Queen St. W. has a schedule that has apparently been changed. But what is known is that after the other two acts from 8:15-9:40, BVD (as Van Dusen is colloquially called) will go on stage at 9:45 followed by Hardy with, I assume, a new combo backing her, at 10:30.

Cover is listed as $6-10/pay-what-you-can, so it sounds like getting bodies into the room is the priority rather than raking in a lot of cash at the door. Both BVD and Hardy also have excellent recorded product they’ll no doubt have available and I would assume that the others do as well. Perhaps Hardy, who was telling everyone that she was working on an album prior to disappearing earlier this year, will also have a surprise in store in that regard and almost certainly she will be unveiling some new songs.