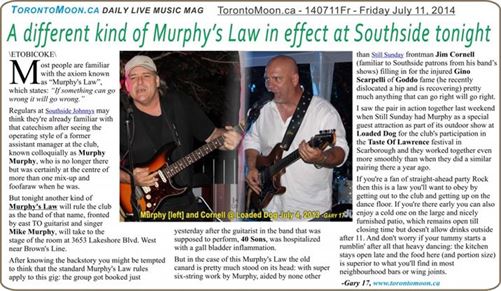 Most people are familiar with the axiom known as “Murphy’s Law”, which states: “If something can go wrong it will go wrong.”

Regulars at Southside Johnny’s may think they’re already familiar with that catechism after seeing the operating style of a former assistant manager at the club, known colloquially as Murphy Murphy, who is no longer there but was certainly at the centre of more than one mix-up and foofaraw when he was.

But tonight another kind of Murphy’s Law will rule the club as the band of that name, fronted by east TO guitarist and singer Mike Murphy, will take to the stage of the room at 3653 Lakeshore Blvd. West near Brown’s Line.

After knowing the backstory you might be tempted to think that the standard Murphy’s Law rules apply to this gig: the group got booked just yesterday after the guitarist in the band that was supposed to perform, 40 Sons, was hospitalized with a gall bladder inflammation.

But in the case of this Murphy’s Law the old canard is pretty much stood on its head: with super six-string work by Murphy, aided by none other than Still Sunday frontman Jim Cornell (familiar to Southside patrons from his band’s shows) filling in for the injured Gino Scarpelli of Goddo fame (he recently dislocated a hip and is recovering) pretty much anything that can go right will go right.

I saw the pair in action together last weekend when Still Sunday had Murphy as a special guest attraction as part of its outdoor show at Loaded Dog for the club’s participation in the Taste Of Lawrence festival in Scarborough and they worked together even more smoothly than when they did a similar pairing there a year ago.

If you’re a fan of straight-ahead party Rock then this is a law you’ll want to obey by getting out to the club and getting up on the dance floor. If you’re there early you can also enjoy a cold one on the large and nicely furnished patio, which remains open till closing time but doesn’t allow drinks outside after 11. And don’t worry if your tummy starts a rumblin’ after all that heavy dancing: the kitchen stays open late and the food here (and portion size) is superior to what you’ll find in most neighbourhood bars or wing joints.