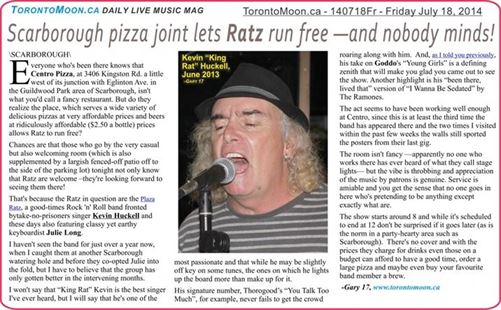 Everyone who’s been there knows that Centro Pizza, at 3406 Kingston Rd. a little west of its junction with Eglinton Ave. in the Guildwood Park area of Scarborough, isn’t what you’d call a fancy restaurant. But do they realize the place, which serves a wide variety of delicious pizzas at very affordable prices and beers at ridiculously affordable ($2.50 a bottle) prices allows Ratz to run free?

Chances are that those who go by the very casual but also welcoming room (which is also supplemented by a largish fenced-off patio off to the side of the parking lot) tonight not only know that Ratz are welcome –they’re looking forward to seeing them there!

That’s because the Ratz in question are the Plaza Ratz, a good-times Rock ‘n’ Roll band fronted by take-no-prisoners singer Kevin Huckell and these days also featuring classy yet earthy keyboardist Julie Long.

I haven’t seen the band for just over a year now, when I caught them at another Scarborough watering hole and before they co-opted Julie into the fold, but I have to believe that the group has only gotten better in the intervening months.

I won’t say that “King Rat” Kevin is the best singer I’ve ever heard, but I will say that he’s one of the most passionate and that while he may be slightly off key on some tunes, the ones on which he lights up the board more than make up for it.

His signature number, Thorogood’s “You Talk Too Much”, for example, never fails to get the crowd roaring along with him.  And, as I told you previously, his take on Goddo’s “Young Girls” is a defining zenith that will make you glad you came out to see the show. Another highlight is his “been there, lived that” version of “I Wanna Be Sedated” by The Ramones.

The act seems to have been working well enough at Centro, since this is at least the third time the band has appeared there and the two times I visited within the past few weeks the walls still sported the posters from their last gig.

The room isn’t fancy —apparently no one who works there has ever heard of what they call stage lights— but the vibe is throbbing and appreciation of the music by patrons is genuine. Service is amiable and you get the sense that no one goes in here who’s pretending to be anything except exactly what are.

The show starts around 8 and while it’s scheduled to end at 12 don’t be surprised if it goes later (as is the norm in a party-hearty area such as Scarborough).  There’s no cover and with the prices they charge for drinks even those on a budget can afford to have a good time, order a large pizza and maybe even buy your favourite band member a brew.