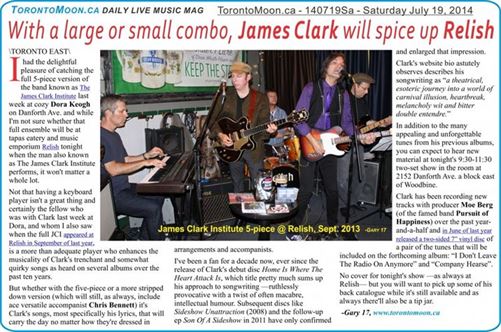 With a large or small combo, James Clark Institute will spice up Relish

I had the delightful pleasure of catching the full 5-piece version of the band known as The James Clark Institute last week at cozy Dora Keogh on Danforth Ave. and while I’m not sure whether that full ensemble will be at tapas eatery and music emporium Relish tonight when the man also known as The James Clark Institute performs, it won’t matter a whole lot.

Not that having a keyboard player isn’t a great thing and certainly the fellow who was with Clark last week at Dora, and whom I also saw when the full JCI appeared at Relish in September of last year, is a more than adequate player who enhances the musicality of Clark’s trenchant and somewhat quirky songs as heard on several albums over the past ten years.

But whether with the five-piece or a more stripped down version (which will still, as always, include ace versatile accompanist Chris Bennett) it’s Clark’s songs, most specifically his lyrics, that will carry the day no matter how they’re dressed in arrangements and accompanists.

I’ve been a fan for a decade now, ever since the release of Clark’s debut disc Home Is Where The Heart Attack Is, which title pretty much sums up his approach to songwriting —ruthlessly provocative with a twist of often macabre, intellectual humour. Subsequent discs like Sideshow Unattraction (2008) and the follow-up ep Son Of A Sideshow in 2011 have only confirmed and enlarged that impression.

In addition to the many appealing and unforgettable tunes from his previous albums, you can expect to hear new material at tonight’s 9:30-11:30 two-set show in the room at 2152 Danforth Ave. a block east of Woodbine.

Clark has been recording new tracks with producer Moe Berg (of the famed band Pursuit of Happiness) over the past year-and-a-half and in June of last year released a two-sided 7” vinyl disc of a pair of the tunes that will be included on the forthcoming album: “I Don’t Leave The Radio On Anymore” and “Company Hearse”.

No cover for tonight’s show —as always at Relish— but you will want to pick up some of his back catalogue while it’s still available and as always there’ll also be a tip jar.