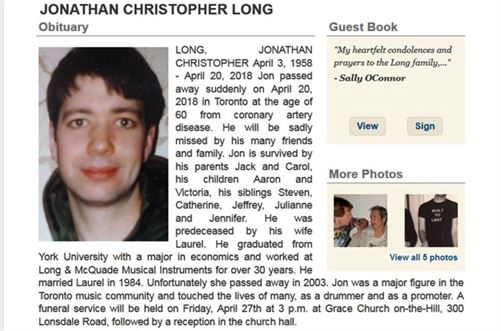 The following tributes are excerpts from just some of the many posted on social media and on the Legacy.com online tribute page by family, friends, band mates and clients of the late Jon Long.  More will be added when the Musical Legacies Online Museum site is created. [See more details at end of this post.]

Julie Long‎ sister:
Thank you to everyone who has reached out to us during this very sad time. We are so grateful for the tremendous outpouring of love and condolences and support. Jon was not only my big brother who always looked out for me, but he was also my friend. We shared a love of music and spent many years playing and creating music together. He always encouraged me and he taught me so many things including the importance of kindness. He once told me that if someone is kind, that was all that really mattered. He was wise and funny and brilliant. I still can’t believe he is gone and I will miss him forever. You were a great brother Jon and I will always love you.

Jen Long‎, sister:
With heavy hearts we share the sad news of Jon Long’s passing. He died peacefully in his sleep yesterday. Jon was a wonderful person. He touched the lives of so many with his kindness, generosity, and love of music. May he rest in peace with his beautiful wife Laurel.
Jon Long Victoria Long Aaron Long Julie Long Jeffrey Long Jack Long Helen Long Jen Long — with Jon Long.

Cathy Guy (nee Long), sister:
Jon was my twin brother and we had a lot of fun growing up together. We used to play in the water together at the cottage for hours at a time. We never fought and always got along well. Jon never lied as a kid. If he did something, he always owned up to it right away. He always teased me about my taste in music because we liked different styles. However, we both loved music.  His life ended too soon, and he will be greatly missed.

Enzo Petrungaro:
Jon was a champion for struggling musicians and underdog promoters and venues for the entire 35 years or so that i knew him. He will be missed dearly!

‎Peter Hagele‎:
Very sorry to hear of the passing of Jon, I first met him at a place called the Marquis, he was promoting and getting acts together and the band I was in did one of his nights. A few years later I was doing gig and went to Long and McQuades to rent a system.I was having some problem with the rental guy , and Jon walked by he recognized me from the gig and went out of his way to establish a credit line. I use to see him around the Roncy area where I lived and once invited him over for dinner to repay him for his kindness.Everytime we ran into each other after that he would always have a smile and we would chat about the music. He would come out to see my piano gigs, When I was looking to purchase a midi piano for my tv composition gigs I went to him and he got me a really good deal. He was a really genuine soul that went out of his way to make us all comfortable .

Doug Lewis:
Danno needed a Mic for an instrument. I suggested Long and McQuade..you dont want a USED mic..lol.
I remember Jeff Long a guy we use to rent gear from at the Dufferin and Wilson Store with Warren Cooper and Larry’s stories…. if you got those guys you only had to fill out the basic part of the rental Agreement, I remember hearing about Jon and him being in Hospital and getting Jon a signed Photo of the Carpet Frogs in a frame for him

Laura Rock:
I’m deeply sadden to hear that Jon Long has passed away. Jon rescued my band back in the 90’s after my keyboard and microphone got fried on stage due to some power surge. He was always kind to many people. You will be sadly missed. RIP my friend you’re a musical angel now.

Wayne Cudney:
My Heart is sad as I heard the news of the passing of a Dear Friend Jon Long,… Thank You for all your Support & Generosity. You were one in a million & truly helped so many Artists with your time & influence. I will miss our talks, walks, laughs, music jams. & fitness routines. I will keep playing our song we wrote, 7 Steps 2 Texas

Stan Humphries:
Some saw Jon as easy to take advantage of but what he was in reality was a man generous of spirit.

John Hutt:
R.I.P Jon Long You helped me out in the music biz and put me in the right direction. You were a great friend, I’ll never forget you.

James Paul:
So very sad to hear that Jon Long has died. My deepest condolences to his family.  I can honestly say that without Jon’s advice, guidance, understanding, and assistance I could never have made a go of running a music studio. I miss you already, Jon. Safe travels, my friend.

Glenn MacRae:
I only knew Jon through work, but I could tell by our conversations together that he was a caring and thoughtful person. He loved dealing with and helping people through troubled times. I learned many things about interacting with people from Jon. Sincere condolences to his children and the entire Long family.

Gregory Lee:
Just heard my old friend Jon Long has passed on. The original Long and McQuade Toronto store on Yonge Street and later Bloor Street were like family. Jon’s father Jack, Bob “Rabbit” Abbott, later Newton Garwood and Jon were much more than salesmen, I always knew they had my back, I always knew they genuinely cared. Jon was the sweetest man, a shining light and I will miss his smile. Not once did I leave Jon’s side without feeling better. Till we meet again my friend. ~rip~

Earl Johnson:
Jon Long - R.I.P. will be missed by so many and with just cause. Jon loved music and he supported so many artists for the right reasons - not a greedy bone in his body or mind. Jon was a huge fan of MOXY and Bill Wade our drummer back in the day. Jon told me once he would come to MOXY gigs just to watch Bills Kick Pedal work. When we did MOXY V back in 2001 he promoted the El Mocambo show and got us lots of PR for the event. He was responsible in every way for the MOXY 40th CD and I owed him a great debt of gratitude. I was aware of his struggles over the past 5 years and feel a deep sense of loss with his departure. If anyone is planning a memorial show for him count me in, he deserves much more than that for what he did for many TO musicians. 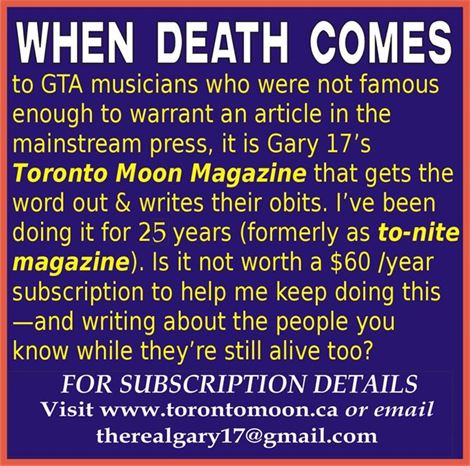 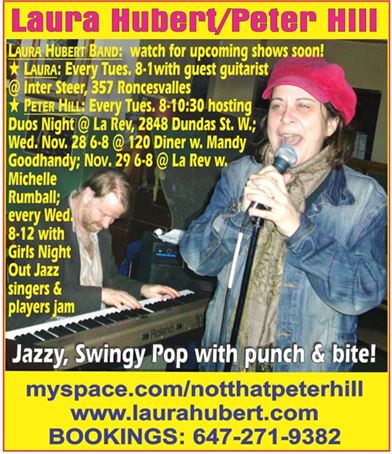