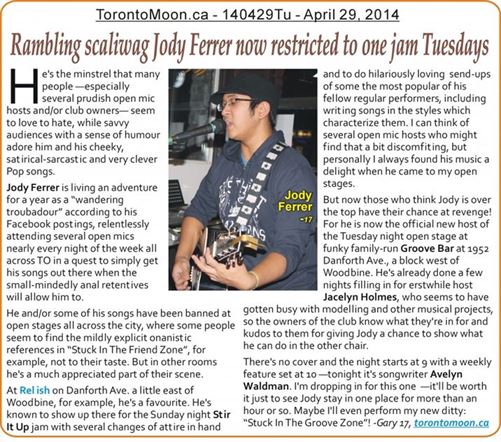 /// He’s the minstrel that many people –especially several prudish open mic hosts and/or club owners— seem to love to hate, while savvy audiences with a sense of humour adore him and his cheeky, satirical-sarcastic and very clever Pop songs.

He and/or some of his songs have been banned at open stages all across the city, where some people seem to find the mildly explicit onanistic references in “Stuck In The Friend Zone”, for example, not to their taste. But in other rooms he’s a much appreciated part of their scene.

At Relish on Danforth Ave. a little east of Woodbine, for example, he’s a favourite. He’s known to show up there for the Sunday night Stir It Up jam with several changes of attire in hand and to do hilariously loving send-ups of some the most popular of his fellow regular performers, including writing songs in the styles which characterize them. I can think of several open mic hosts who might find that a bit discomfiting, but personally I always found his music a delight when he came to my open stages.

But now those who think Jody is over the top have their chance at revenge! For he is now the official new host of the Tuesday night open stage at funky family-run Groove Bar at 1952 Danforth Ave., a block west of Woodbine. He’s already done a few nights filling in for erstwhile host Jacelyn Holmes, who seems to have gotten busy with modelling and other musical projects, so the owners of the club know what they’re in for and kudos to them for giving Jody a chance to show what he can do in the other chair.

There’s no cover and the night starts at 9 with a weekly feature set at 10 –tonight it’s songwriter Avelyn Waldman. I’m dropping in for this one –it’ll be worth it just to see Jody stay in one place for more than an hour or so. Maybe I’ll even perform my new ditty: “Stuck In The Groove Zone”! -Gary 17, www.torontomoon.ca