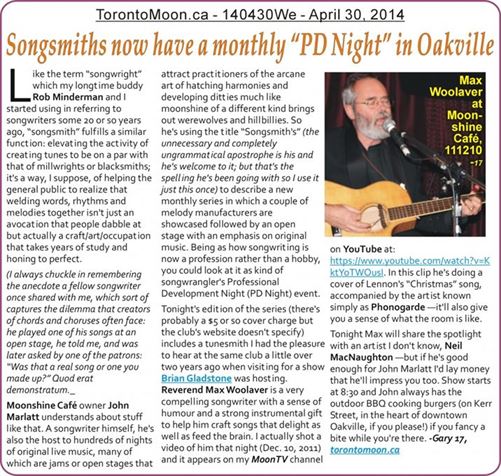 Songsmiths now have a monthly “PD Night” in Oakville

/// Like the term “songwright” which my longtime buddy Rob Minderman and I started using in referring to songwriters some 20 or so years ago, “songsmith” fulfills a similar function: elevating the activity of creating tunes to be on a par with that of millwrights or blacksmiths; it’s a way, I suppose, of helping the general public to realize that welding words, rhythms and melodies together isn’t just an avocation that people dabble at but actually a craft/art/occupation that takes years of study and honing to perfect.

(I always chuckle in remembering the anecdote a fellow songwriter once shared with me, which sort of captures the dilemma that creators of chords and choruses often face: he played one of his songs at an open stage, he told me, and was later asked by one of the patrons: “Was that a real song or one you made up?” Quod erat demonstratum.)

Moonshine Café owner John Marlatt understands about stuff like that. A songwriter himself, he’s also the host to hundreds of nights of original live music, many of which are jams or open stages that attract practitioners of the arcane art of hatching harmonies and developing ditties much like moonshine of a different kind brings out werewolves and hillbillies. So he’s using the title “Songsmith’s” (the unnecessary and completely ungrammatical apostrophe is his –and he’s welcome to it; but that’s the spelling he’s been going with so I use it just this once) to describe a new monthly series in which a couple of melody manufacturers are showcased followed by an open stage with an emphasis on original music. Being as how songwriting is now a profession rather than a hobby, you could look at it as kind of songwrangler’s Professional Development Day event.

Tonight’s edition of the series (there’s probably a $5 or so cover charge but the club’s website doesn’t specify) includes a tunesmith I had the pleasure to hear at the same club a little over two years ago when visiting for a show Brian Gladstone was hosting.  Reverend Max Woolaver is a very compelling songwriter with a sense of humour and a strong instrumental gift to help him craft songs that delight as well as feed the brain. I actually shot a video of him that night (Dec. 10, 2011) and it appears on my MoonTV channel on YouTube at: https://www.youtube.com/watch?v=KktYoTWOusI. In this clip he’s doing a cover of Lennon’s “Christmas” song, accompanied by the artist known simply as Phonogarde –it’ll also give you a sense of what the room is like.

Tonight Max will share the spotlight with an artist I don’t know, Neil MacNaughton —but if he’s good enough for John Marlatt I’d lay money that he’ll impress you too. Show starts at 8:30 and John always has the outdoor BBQ cooking burgers (on Kerr Street, in the heart of downtown Oakville, if you please!) if you fancy a bite while you’re there. -Gary 17, www.torontomoon.ca

Listings preceded by an asterisk (*) are repeating weekly events. Admission prices followed by a slash and minus (/-) after the amount indicates door charge with availability of cheaper rates for some purchases. /+ indicates stated price is minimum. Names of subscribers appear in bold and include a live link to their websites where applicable. Advertisers’ listings are in larger type, include live link to website and also have ad icon included in listings.