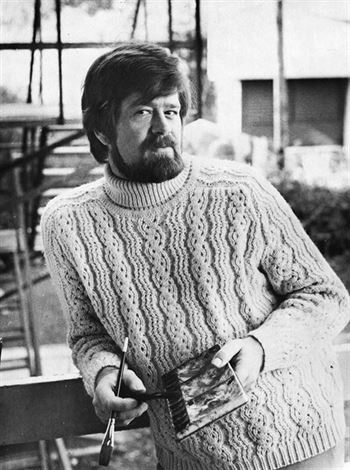 Expressions of shock and accolades honouring his many contributions to music and art in Hamilton erupted yesterday as news of the death of Bill Powell began to spread.

His longtime wife and partner in all his endeavours, Lynne Powell, posted on Facebook yesterday morning that the painter, founder of the Festival of Friends, manager of songwriters such as Tom Wilson, Paul Langille and the late Jackie Washington, and a lion on the local art scene, had died in hospital Sunday, September 13 after fighting an infection that didn’t respond to treatment.

Powell, 76, had been dealing with health issues for the past few years, according to a Hamilton newspaper report, which mentioned he had returned to his original focus of painting after retiring about fifteen years ago as director of the Festival he began in 1976.

Despite his failing health, Ms. Powell posted that his passing was “unexpected.”

At his Canvas Gallery on Augusta Street in the early 70s the Powells presented works by a legion of then-unknown artists, engendering their lifelong gratitude and enabling some to go on to illustrious careers.

Likewise, Powell is also a legend in Folk music circles as the proprietor at the same time of Knights II Coffee House across the street from his gallery, which featured now iconic artists such as Doug MacArthur, Langille and Brent Titcomb among many others.

I knew Bill fairly well when I lived in Hamilton for several years up to and including the first FOF event at Gage Park in the heart of the old city. For a while, in the autumn of 1973, we were practically neighbours when I briefly published a periodical known as Hamilton Life out of an office at 1 Duke St. a short walk from both Powell’s gallery and coffee house. Although money was always tight for him, he nevertheless shelled out to place ads for both of his enterprises in the debut issue.

Even then, when the city’s art and music scenes were very marginalized by the local “steel city” culture, Powell, the son of a steel worker himself, was a visionary who believed it was possible to grow the local scene by banding artists of various disciplines together to jointly promote one another.

Many of the beneficiaries of Powell’s vision and unstinting devotion to the arts in both fields expressed their shock and condolences on Ms. Powell’s Facebook timeline or in newspaper interviews.

Hamilton’s mayor, Fred Eisenberger, told the local newspaper that Powell “was one of the first to consider Hamilton culture, music and arts as an economic driver that we now all accept as one of the key elements of our future health and prosperity as a city.”

Songwriter Wilson (Junkhouse, Blackie and the Rodeo Kings) described Powell as “the tabasco sauce in a bowl of dull porridge.”

Jean-Paul Gauthier, who runs the Hamilton Music Awards, said Powell was “the first to promote Hamilton art and culture on a grand scale,” while current FOF executive director Loren Lieberman was quoted as saying “there would be no Hamilton arts without Bill Powell.”

Since Powell did not want a funeral or interment, his body has been cremated and friends, family and fans will be holding a celebration of his life at a later date. In addition to his wife he is survived by two children and four grandchildren.