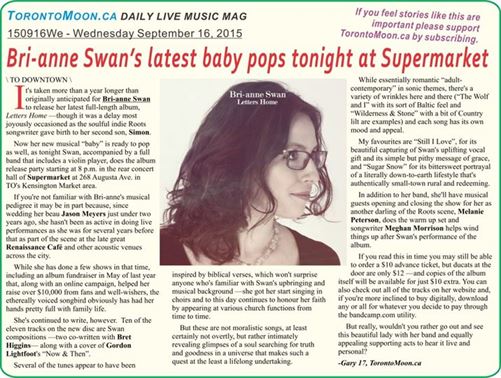 It’s taken more than a year longer than originally anticipated for Bri-anne Swan to release her latest full-length album, Letters Home —though it was a delay most joyously occasioned as the soulful indie Roots songwriter gave birth to her second son, Simon.

Now her new musical “baby” is ready to pop as well, as tonight Swan, accompanied by a full band that includes a violin player, does the album release party starting at 8 p.m. in the rear concert hall of Supermarket at 268 Augusta Ave. in TO’s Kensington Market area.

If you’re not familiar with Bri-anne’s musical pedigree it may be in part because, since wedding her beau Jason Meyers just under two years ago, she hasn’t been as active in doing live performances as she was for several years before that as part of the scene at the late great Renaissance Café and other acoustic venues across the city.

While she has done a few shows in that time, including an album fundraiser in May of last year that, along with an online campaign, helped her raise over $10,000 from fans and well-wishers, the ethereally voiced songbird obviously has had her hands pretty full with family life.

She’s continued to write, however.  Ten of the eleven tracks on the new disc are Swan compositions —two co-written with Bret Higgins— along with a cover of Gordon Lightfoot’s “Now & Then”.

Several of the tunes appear to have been inspired by biblical verses, which won’t surprise anyone who’s familiar with Swan’s upbringing and musical background —she got her start singing in choirs and to this day continues to honour her faith by appearing at various church functions from time to time.

But these are not moralistic songs, at least certainly not overtly, but rather intimately revealing glimpses of a soul searching for truth and goodness in a universe that makes such a quest at the least a lifelong undertaking.

While essentially romantic “adult-contemporary” in sonic themes, there’s a variety of wrinkles here and there (“The Wolf and I” with its sort of Baltic feel and “Wilderness & Stone” with a bit of Country lilt are examples) and each song has its own mood and appeal.

My favourites are “Still I Love”, for its beautiful capturing of Swan’s uplifting vocal gift and its simple but pithy message of grace, and “Sugar Snow” for its bittersweet portrayal of a literally down-to-earth lifestyle that’s authentically small-town rural and redeeming.

In addition to her band, she’ll have musical guests opening and closing the show for her as another darling of the Roots scene, Melanie Peterson, does the warm up set and songwriter Meghan Morrison helps wind things up after Swan’s performance of the album.

If you read this in time you may still be able to order a $10 advance ticket, but ducats at the door are only $12 —and copies of the album itself will be available for just $10 extra. You can also check out all of the tracks on her website and, if you’re more inclined to buy digitally, download any or all for whatever you decide to pay through the bandcamp.com utility.

But really, wouldn’t you rather go out and see this beautiful lady with her band and equally appealing supporting acts to hear it live and personal?