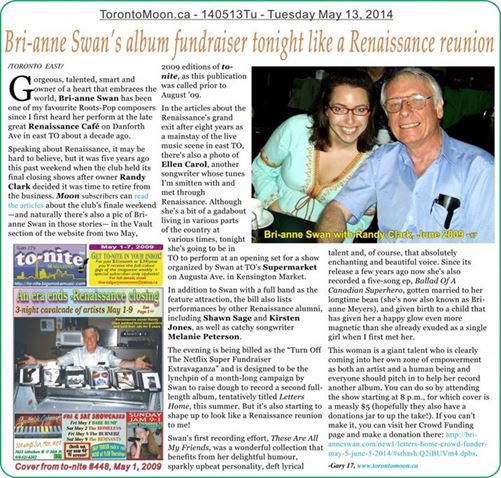 Gorgeous, talented, smart and owner of a heart that embraces the world, Bri-anne Swan has been one of my favourite Roots-Pop composers since I first heard her perform at the late great Renaissance Café on Danforth Ave in east TO about a decade ago.

Speaking about Renaissance, it may be hard to believe, but it was five years ago this past weekend when the club held its final closing shows after owner Randy Clark decided it was time to retire from the business. Moon subscribers can read the articles about the club’s finale weekend —and naturally there’s also a pic of Bri-anne Swan in those stories— in the Vault section of the website from two May, 2009 editions of to-nite, as this publication was called prior to August ’09.

In the articles about the Renaissance’s grand exit after eight years as a mainstay of the live music scene in east TO, there’s also a photo of Ellen Carol, another songwriter whose tunes I’m smitten with and met through Renaissance. Although she’s a bit of a gadabout living in various parts of the country at various times, tonight she’s going to be in TO to perform at an opening set for a show organized by Swan at TO’s Supermarket on Augusta Ave. in Kensington Market.

In addition to Swan with a full band as the feature attraction, the bill also lists performances by other Renaissance alumni, including Shawn Sage and Kirsten Jones, as well as catchy songwriter Melanie Peterson.

The evening is being billed as the “Turn Off The Netflix Super Fundraiser Extravaganza” and is designed to be the lynchpin of a month-long campaign by Swan to raise dough to record a second full-length album, tentatively titled Letters Home, this summer. But it’s also starting to shape up to look like a Renaissance reunion to me!

Swan’s first recording effort, These Are All My Friends, was a wonderful collection that benefits from her delightful humour, sparkly upbeat personality, deft lyrical talent and, of course, that absolutely enchanting and beautiful voice. Since its release a few years ago now she’s also recorded a five-song ep, Ballad Of A Canadian Superhero, gotten married to her longtime beau (she’s now also known as Bri-anne Meyers), and given birth to a child that has given her a happy glow even more magnetic than she already exuded as a single girl when I first met her.

This woman is a giant talent who is clearly coming into her own zone of empowerment as both an artist and a human being and everyone should pitch in to help her record another album. You can do so by attending the show starting at 8 p.m., for which cover is a measly $5 (hopefully they also have a donations jar to up the take!). If you can’t make it, you can visit her Crowd Funding page and make a donation there: http://bri-anneswan.com/new1/letters-home-crowd-funder-may-5-june-5-2014/#sthash.Q2iBUVm4.dpbs.