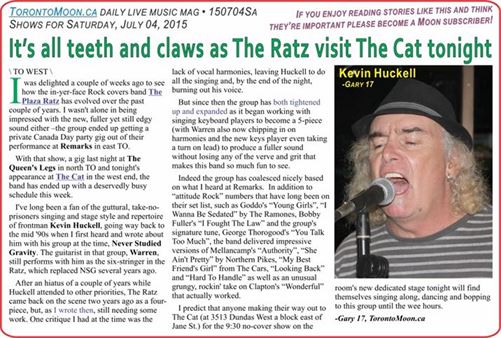 I was delighted a couple of weeks ago to see how the in-yer-face Rock covers band The Plaza Ratz has evolved over the past couple of years. I wasn’t alone in being impressed with the new, fuller yet still edgy sound either –the group ended up getting a private Canada Day party gig out of their performance at Remarks in east TO.

With that show, a gig last night at The Queen’s Legs in north TO and tonight’s appearance at The Cat in the west end, the band has ended up with a deservedly busy schedule this week.

I’ve long been a fan of the guttural, take-no-prisoners singing and stage style and repertoire of frontman Kevin Huckell, going way back to the mid ‘90s when I first heard and wrote about him with his group at the time, Never Studied Gravity. The guitarist in that group, Warren, still performs with him as the six-stringer in the Ratz, which replaced NSG several years ago. 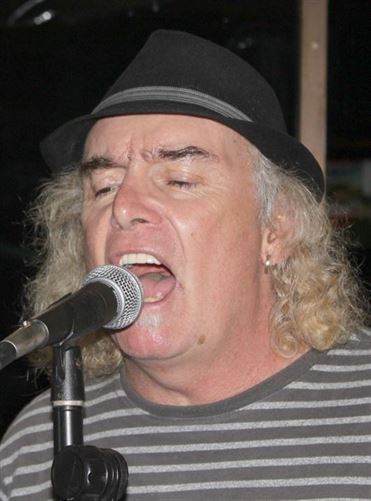 After an hiatus of a couple of years while Huckell attended to other priorities, The Ratz came back on the scene two years ago as a four-piece, but, as I wrote then, still needing some work. One critique I had at the time was the lack of vocal harmonies, leaving Huckell to do all the singing and, by the end of the night, burning out his voice.

But since then the group has both tightened up and expanded as it began working with singing keyboard players to become a 5-piece (with Warren also now chipping in on harmonies and the new keys player even taking a turn on lead) to produce a fuller sound without losing any of the verve and grit that makes this band so much fun to see.

Indeed the group has coalesced nicely based on what I heard at Remarks.  In addition to “attitude Rock” numbers that have long been on their set list, such as Goddo’s “Young Girls”, “I Wanna Be Sedated” by The Ramones, Bobby Fuller’s “I Fought The Law” and the group’s signature tune, George Thorogood’s “You Talk Too Much”, the band delivered impressive versions of Mellancamp’s “Authority”, “She Ain’t Pretty” by Northern Pikes, “My Best Friend’s Girl” from The Cars, “Looking Back” and “Hard To Handle” as well as an unusual grungy, rockin’ take on Clapton’s “Wonderful” that actually worked.

I predict that anyone making their way out to The Cat (at 3513 Dundas West a block east of Jane St.) for the 9:30 no-cover show on the room’s new dedicated stage tonight will find themselves singing along, dancing and bopping to this group until the wee hours.

11:15 a.m.> Nicole “Songbird” Coward interviewed by Jim Marino on “The Freewheelin’ Folk Show” on the air and online at 93.3 CFMU 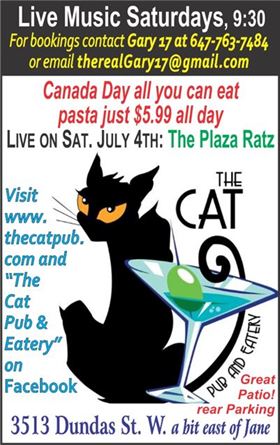