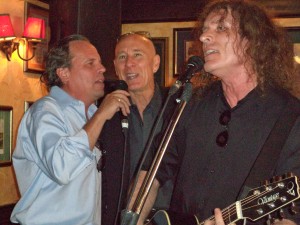 It’s hard for me to believe that it’s been, as I write this, a month now since I attended a gathering at Scruffy’s Murphy’s on Eglinton Ave. held to celebrate the life of my ol’ buddy Adrian “Tex Chainsaw” Egan, about whose passing and influence I wrote at the time.

This was a remarkable occasion in many respects, first and foremost because it was suffused with a sense of surreality, since I don’t think anyone there could quite believe that Tex wouldn’t at some point walk through the door to join in the fun.  And there was a lot of that, as Adrian himself might have prescribed and organized: his longtime buddy “Spike” commented as he left that “my sides hurt —I thought I was going to a memorial and I ended up at Yuk Yuks!”

And of course there was also live music, even though the bar had a goodly number of patrons on hand to watch the big finale Euro Tournament soccer match being televised there.  Take-charge musician and tech Shawn Hackett had a small system in his vehicle and without even asking permission proceeded to set it up in the club’s small performance area “because I can.”

Along with Denis Martel and, to wrap things up later on Adrian’s nephew, Brady O’Sullivan, the stage was graced by multi-talented Jeff Lazare and two other performers among the uptown “boys club” of musicians who used to perform frequently in the area in various configurations: John Bouvette and Michael Danckert.

John is struggling with vision issues so rarely performs any more (though you couldn’t have told that by the stirring mini-set he did) but Danckert, like High Rollers front man and sought-after accompanist Martel, is still going strong playing a diverse range of rooms all over the city.

It’d been a few years since I’d seen Michael on stage and I hardly recognized the smooth, polished backup singing crooner who did so with the others this day on “If I Fell” and “Nowhere Man” —before having to leave earlyish to do a gig he’d previously contracted to play elsewhere in the city.  I always think of Michael as the shaggy-haired, leather jacket and jeans-clad Rock and Blues performer I knew on the uptown scene in the ‘90s and early millennium, but clearly he’s expanded his look and presumably his repertoire to accommodate a variety of audiences —as nearly every performer who wants to work at it full time has had to these days, I suppose.

I’m not sure whether or not he has a regular Rock band going any more but I do know, since I list many of his shows, that he’s been doing a lot of acoustic covers duo work with fellow journeyman guitarist-singer Bob Strome over the past year or two.  I’m also not at all sure whether Strome will be joining him for the early 7 p.m. show he’s doing tonight up near his old uptown stomping grounds.

Located at 1980 Avenue Road, well north of Lawrence Avenue and the Bedford Park area, the Drums and Flats room is out of the mainstream music action by quite a bit, though the acclaimed Left Bank restaurant is across the street up the way a block and there’s also a Firkin pub facing it.  While it has had music on weekends occasionally, these days the venue seems resigned to Thursdays only most weeks and I have no idea what sort of performance area is offered inside.

Nevertheless, whether he has a fancy stage or has to clear tables out of the way, is bolstered by accompaniment or is carrying the show load by his lonesome, you can’t go too far wrong with Danckert given his mastery of Pop Rock covers and, as I’ve written previously, that delightful store of BritPop style originals.