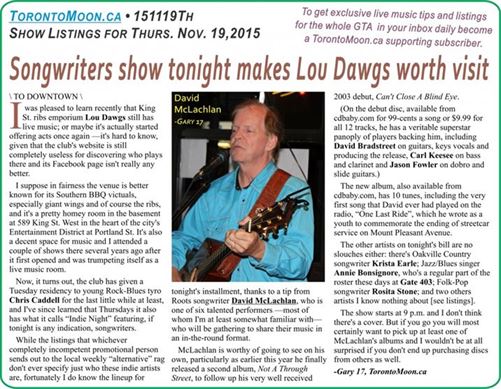 I was pleased to learn recently that King St. ribs emporium Lou Dawgs still has live music; or maybe it’s actually started offering acts once again —it’s hard to know, given that the club’s website is still completely useless for discovering who plays there and its Facebook page isn’t really any better.

I suppose in fairness the venue is better known for its Southern BBQ victuals, especially giant wings and of course the ribs, and it’s a pretty homey room in the basement at 589 King St. West in the heart of the city’s Entertainment District at Portland St. It’s also a decent space for music and I attended a couple of shows there several years ago after it first opened and was trumpeting itself as a live music room.

Now, it turns out, the club has given a Tuesday residency to young Rock-Blues tyro Chris Caddell for the last little while at least, and I’ve since learned that Thursdays it also has what it calls “Indie Night” featuring, if tonight is any indication, songwriters.

While the listings that whichever completely incompetent promotional person sends out to the local weekly “alternative” rag don’t ever specify just who these indie artists are, fortunately I do know the lineup for tonight’s installment, thanks to a tip from Roots songwriter David McLachlan, who is one of six talented performers —most of whom I’m at least somewhat familiar with— who will be gathering to share their music in an in-the-round format.

McLachlan is worthy of going to see on his own, particularly as earlier this year he finally released a second album, Not A Through Street, to follow up his very well received 2003 debut, Can’t Close A Blind Eye.

(On the debut disc, available from cdbaby.com for 99-cents a song or $9.99 for all 12 tracks, he has a veritable superstar panoply of players backing him, including David Bradstreet on guitars, keys vocals and producing the release, Carl Keesee on bass and clarinet and Jason Fowler on dobro and slide guitars.)

The new album, also available from cdbaby.com, has 10 tunes, including the very first song that David ever had played on the radio, “One Last Ride”, which he wrote as a youth to commemorate the ending of streetcar service on Mount Pleasant Avenue.

The other artists on tonight’s bill are no slouches either: there’s Oakville Country songwriter Krista Earle; Jazz/Blues singer Annie Bonsignore, who’s a regular part of the roster these days at Gate 403; Folk-Pop songwriter Rosita Stone; and two others artists I know nothing about [see listings].

The show starts at 9 p.m. and I don’t think there’s a cover. But if you go you will most certainly want to pick up at least one of McLachlan’s albums and I wouldn’t be at all surprised if you don’t end up purchasing discs from others as well.