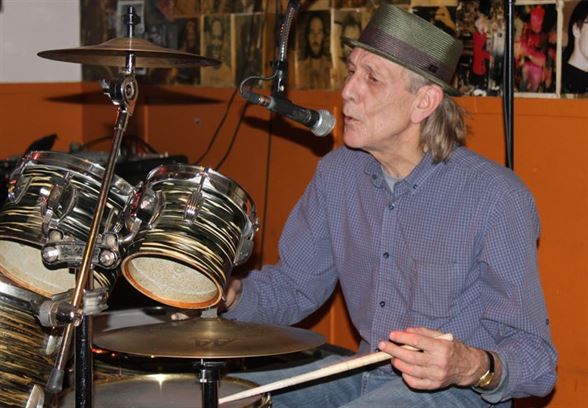 Drummer/singer Bill Hedefine will be carrying on a longstanding tradition tonight as he helms the open jam at Grossman’s Tavern despite the death of his longtime Blues guitar ace bandmate Brian Cober on Thursday.

“We will be playing music this Sunday night,” Hedefine posted in the Grossman’s Sunday Night Jam group on Facebook yesterday, “because that’s what Brian wanted.

“Please come and join us and Brian will be there smiling down on us,” he said.

The funeral and cremation for Cober, who succumbed to cancer after a two-year struggle with the monster, will take place this coming Tuesday, December 20,  Visitation will commence an hour before the 6 p.m. service in the Cardinal Funeral Home at 366 Bathurst Street just north of Dundas St. and adjacent to the Kensington Market area where Brian felt so at home for so many years after moving to Toronto from Preston, Ontario in the early 1990s.

Messages of condolence can also be left on the funeral home’s website at http://www.cardinalfuneralhomes.com/services/sendcondolences.aspx?section=6&obid=204680.

For Hedefine, meanwhile, keeping on is something he’s surely grown accustomed to by now.  It’s not like he hasn’t dealt with the loss of other musicians since starting in as the sticks man for the jams at Grossman’s.  In the nearly 35 years that he’s been involved in running a Sunday jam at the club at 379 Spadina Ave. a little south of College, a lot of other talents have shuffled off the mortal coil.

I’ve known Hedefine (who, btw, is an ace guitar player and songwriter in his own right, despite burying that particular light under a bushel of drums) since we were teenagers in Burlington in the 1960s, when everyone forecast that the bony, haunted-looking stringbean known to enjoy a wide variety of illegal substances would be dead before 1970 arrived.  But the resilient reprobate, who claims to be 64 but could be older, has outlived more than a few who made that prediction.

Cober, whose double-slide technique had begun to get him noticed on the local Blues scene by the mid-1990s, actually started hosting his first jam at the club exactly 20 years and one week before he passed away, to-nite archives from 1996 show.

Prior to December 8 ’96, the afternoon and evening jams were headlined by a variety of different acts after the Blue Sneakers group that included Hedefine, which had been running the afternoon jam since 1990 [as described in an article from The Open Season #03, May 1992] disbanded sometime in late ’93 or ‘94, well before Brian started in.

Cober, along with his bass player, the late Paul McNamara, and a drummer whose name has since faded into obscurity, was listed as the afternoon jam host as of December 8, ’96 and eventually was given the plum evening spot.

By 2001, at least, Hedefine had become the new and permanent drummer for Brian’s outfit The Nationals, because the trio and its Sunday night jam were praised highly in an article by reviewer Diane Wells in to-nite #209 in late May of that year. [See article in Vault.]

Hedefine seems to be dealing with the loss of the man he describes as “my brother” in the most therapeutic way he knows how, just as he and Brian had coped with the sudden passing of McNamara back in 2008, by keeping on keeping on playing.  It’s probably what has helped him to endure and thrive for so many years in such a volatile culture.

Just as he and Brian began introducing a special guest bass player each week to take McNamara’s spot (since the shoes and hole in the heart were too big to fill permanently) tonight Bill will have the originally scheduled guest bassist, Al Kavanaugh, on hand, and Nick Tabarias will sit in as house band guitarist.

“I will be playing with Nick Tabarias and Al Kavanaugh and hopefully you too,” Bill said in concluding his Facebook post yesterday.

The jam is scheduled to begin around 10 and runs till close, but I’d expect this place will get packed early evening as friends, fellow players and fans of the late host gather to begin sharing their grief, memories and stories.