For me, the penultimate artifact at the Horseshoe Tavern was the Perfumatic machine that was a permanent fixture in the cavernous Women’s washroom located in the basement —second only to the condom machine in the Men’s room, which I have never seen.

The Perfumatic was a suitcase sized Baby-Aspirin-Pink tin box that hung on the wall near the sinks.  It looked like something that belonged in Barbarella’s boudoir.  The front of it had a fender like a Chevy with the words “New York, Paris-London” emblazoned in a creamy yellow on a black shiny background.  The very fact that cities were listed made a girl feel like a jet-setting citizen of the world, rather than another boozy dame slumming around on Queen Street.

The world-famous Perfumatic was decorated with sexy slits and plungers that would allow a lady to insert a dime and then spray a skunk tail’s shot worth of one of four favorite iconic perfumes on her upturned wrist.  However, the truly adventurous and buxom Rockabilly girl would press her breasts up to the plunger to give her cleavage a squirt of one of these worldly elixirs.  To add to the sexual tension of working this fabulous Fifties dashboard, the directions urged a girl to “PRESS PLUNGER FIRMLY ALL THE WAY IN” in order to dispense aroma on her skin.  She would then go sashaying back up the broad, sweating Formica bad rubber staircase, followed by the wafting vapor of her chosen aroma, to join her partner on the dance floor (or mosh pit, depending on what year you happened to be there.) 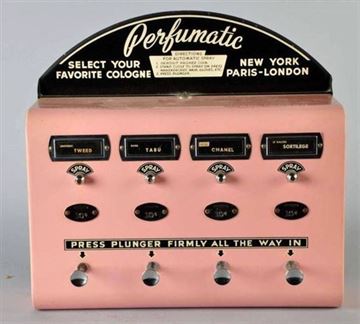 The fabled Perfumatic at The Horseshoe Tavern.

Made right here in Toronto by the Mercury Tool and Stamping Toronto, beginning in 1947, the Perfumatic was truly a Canadian novelty item that found itself in taverns and gas stations across the country.  The Perfumatic in the Horseshoe tavern offered spritzes of four scents, each of which I think also suited four epochs of music history in Toronto.  These were, from right to let, Tweed, Tabu, Chanel and Sortilege.  Weirdly all of these scents were created in 1933, but luckily, most of them are timeless classics that lurked, like precious embalming fluid, in the glass tubes inside of the Perfumatic.  The Legendary Horseshoe Tavern is one of the only places that I ever remember seeing one of these wall-mounted perfume pumping stations by the time I started going there in 1977.

The first scent dispensed on the pump on the far left was Tweed, which was made by the prim and proper retailer Lord and Taylor.  This is a staid, English classic that smelled good clinging in the fibers of pink cashmere sweater.  It was an earthy, flora odor, with a slightly stuffy, yet feminine quality to it.  Your basic Toronto bank teller or shop girl, out for a night on the town in the 1950s could dance on the offbeat all night but then also wear the stifling oriental scent to church the next day and perfectly blend in with the sacramental incense.

Tweed perfectly suited the era of the fifties to the sixties when Jack Starr owned the club and was booking superstars like Willie Nelson, Conway Twitty, Loretta Lyn, Waylon Jennings and Charlie Pride.  Tweed was also a very safe and very Toronto scent.  I imagine it often filled the nostrils of Stompin’ Tom Connors as he raised the roof at the joint on many hot and humid Toronto nights.  This is a good thing, because if there is one thing that such a heady mix of sandalwood, benzoin, vanilla and oak moss could mask, it was body odor.

The second playful spritz ejected out of the pink Perfumatic causing was the skunk-like reek of Tabu.  Tabu is the Lazarus of fragrances, resurrecting in popularity over the years again and again to enjoy a peak of mass popularity in the discos of the late seventies and eighties.  This particular scent has an interesting history, as its creator, Jean Carles, was instructed to make “un parfum de puta,” which translates to mean, “a fragrance for a whore.”  In 1933, this translated to mixing up a bit of sandalwood and patchouli with rose, ylang ylang, jasmine, narcissus and civet, which is basically animal urea.

The fact that it contains piss makes Tabu the perfect perfume for transporting a girl through time to Horseshoe era of The Gary’s and The Last Pogo, which lasted from 1976 to 1983.  During this time promoters Gary Cormier and Gary Topp took over the tavern from its original owner Jack Starr and brought in some incredibly influential musical sounds including The Cramps, The Ramones, MC-5, the Talking Heads and The Police.  Tabu, with its Art Deco bottle so reminiscent of a Broadway marquee, made its reek known through seven years of Toronto punk and New Wave.  The reign of the Garys culminated in a slightly violent going-away party featuring The Mods, Viletones, Scenics and Cardboard Brains that was shut down by the cops and that was documented for posterity by Colin Brunton in a film called “The Last Pogo”.

The third dispenser on the Perfumatic dispensed good old Chanel No. 5, which is a very pungent mix of lily-o-the-valley, pear, vanilla, lemon, ylang yang and iris.  Coco Chanel described her signature scent as a “a constellation of diamonds.”  This was somewhat reminiscent of the old diamond dust ball that used to hang on the Horseshoe stage and would often reflect odd shards of light on the performer’s faces while they sang on stage.  Chanel No. 5 is perfect to describe the Ken Sprackman and X-Ray Era of performers at the Horseshoe, which spanned from 1983 to about 1997 and featured straighter acts that had more of retro feel such as Blue Rodeo, Handsome Ned, Prairie Oyster, The Tragically Hip and the Rheostatics.  These were the players that, like much like classic perfume, became the classic sounds of Queen Street.  This was the era of The Horseshoe that helped to create some Canadian superstars such as The Bourbon Tabernacle Choir, The Phantoms, the Bopcats, The Sadies and the Skydiggers.

The fourth perfume plunger on the Perfumatic in the Horseshoe washroom dispensed a little-known perfume called Sortilege.  This glorious, heady scent smells like a day-old funeral wreath with aromas of lily-of-the-valley, narcissus, mimosa, lilacs and aldehydes.  This long-lost perfume is reminiscent of the death of rock at the Shoe and a rebirth of its Folk and Roots music.  During this time and up until the present, the Shoe has returned to its Rock and Punk roots, featuring a great diversity of acts that seem to channel the sounds of the past.  Bands that have risen in this era include Dead Milkmen, Circle Jerks, Ministry, Wilco, Neko Case, Nickelback and Billy Talent, with sounds that many would say are the product of a kind of Music-o-Matic Star-Making machine.

The last time I was at the Horseshoe, for the “Martian Awareness Ball” earlier this year, I went downstairs to the washroom to visit my favorite retro girly perfume dashboard —only to find that it was no longer there!   Yet still, somehow, there is something stoic and enduring about The Legendary Horseshoe Tavern and its cycles of constantly revisited musical stylings, something in the air that reminds us that “the more things change, the more they smell the same.”