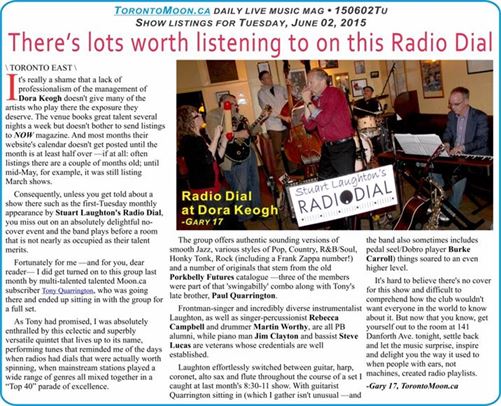 It’s really a shame that a lack of professionalism of the management of Dora Keogh doesn’t give many of the artists who play there the exposure they deserve. The venue books great talent several nights a week but doesn’t bother to send listings to NOW magazine. And most months their website’s calendar doesn’t get posted until the month is at least half over —if at all: often listings there are a couple of months old; until mid-May, for example, it was still listing March shows.

Consequently, unless you get told about a show there such as the first-Tuesday monthly appearance by Stuart Laughton’s Radio Dial, you miss out on an absolutely delightful no-cover event and the band plays before a room that is not nearly as occupied as their talent merits. 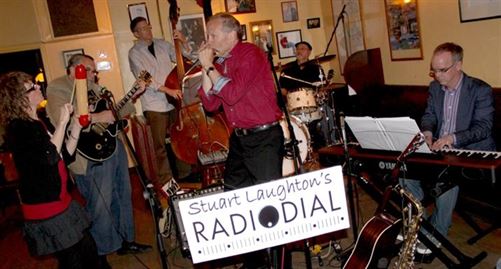 Fortunately for me —and for you, dear reader— I did get turned on to this group last month by multi-talented talented Moon.ca subscriber Tony Quarrington, who was going there and ended up sitting in with the group for a full set.

As Tony had promised, I was absolutely enthralled by this eclectic and superbly versatile quintet that lives up to its name, performing tunes that reminded me of the days when radios had dials that were actually worth spinning, when mainstream stations played a wide range of genres all mixed together in a “Top 40” parade of excellence.

The group offers authentic sounding versions of smooth Jazz, various styles of Pop, Country, R&B/Soul, Honky Tonk, Rock (including a Frank Zappa number!) and a number of originals that stem from the old Porkbelly Futures catalogue —three of the members were part of that ‘swingabilly’ combo along with Tony’s late brother, Paul Quarrington.

Frontman-singer and incredibly diverse instrumentalist Laughton, as well as singer-percussionist Rebecca Campbell and drummer Martin Worthy, are all PB alumni, while piano man Jim Clayton and bassist Steve Lucas are veterans whose credentials are well established.

Laughton effortlessly switched between guitar, harp, coronet, alto sax and flute throughout the course of a set I caught at last month’s 8:30-11 show. With guitarist Quarrington sitting in (which I gather isn’t unusual —and the band also sometimes includes pedal seel/Dobro player Burke Carroll) things soared to an even higher level.

It’s hard to believe there’s no cover for this show and difficult to comprehend how the club wouldn’t want everyone in the world to know about it. But now that you know, get yourself out to the room at 141 Danforth Ave. tonight, settle back and let the music surprise, inspire and delight you the way it used to when people with ears, not machines, created radio playlists.