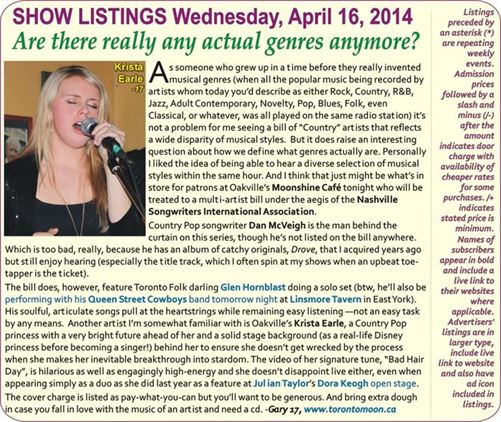 Are there really any actual genres anymore?

/// As someone who grew up in a time before they really invented musical genres (when all the popular music being recorded by artists whom today you’d describe as either Rock, Country, R&B, Jazz, Adult Contemporary, Novelty, Pop, Blues, Folk, even Classical, or whatever, was all played on the same radio station) it’s not a problem for me seeing a bill of “Country” artists that reflects a wide disparity of musical styles.  But it does raise an interesting question about how we define what genres actually are. Personally I liked the idea of being able to hear a diverse selection of musical styles within the same hour. And I think that just might be what’s in store for patrons at Oakville’s Moonshine Café tonight who will be treated to a multi-artist bill under the aegis of the Nashville Songwriters International Association.

The bill does, however, feature Toronto Folk darling Glen Hornblast doing a solo set (btw, he’ll also be performing with his Queen Street Cowboys band tomorrow night at Linsmore Tavern in East York).  His soulful, articulate songs pull at the heartstrings while remaining easy listening —not an easy task by any means.  Another artist I’m somewhat familiar with is Oakville’s Krista Earle, a Country Pop princess with a very bright future ahead of her and a solid stage background (as a real-life Disney princess before becoming a singer!) behind her to ensure she doesn’t get wrecked by the process when she makes her inevitable breakthrough into stardom. The video of her signature tune, “Bad Hair Day”, is hilarious as well as engagingly high-energy and she doesn’t disappoint live either, even when appearing simply as a duo as she did last year as a feature at Julian Taylor’s Dora Keogh open stage.

The cover charge is listed as pay-what-you-can but you’ll want to be generous. And bring extra dough in case you fall in love with the music of an artist and need a cd -Gary 17, www.torontomoon.ca

9:45> Wednesdays Go Pop showcase with Yolanda Ho; The Fox and the Moon; The Other Birds @ Supermarket, 268 Augusta Ave., TO ~indie