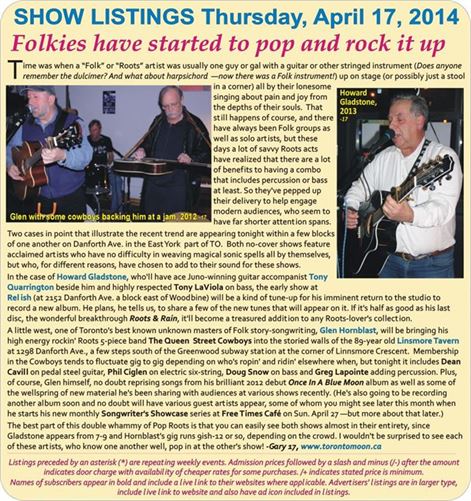 [Editor’s Note: Since this was post published overnight Relish announced that Howard Gladstone had to cancel his show tonight due to illness. He will be replaced by Brad Alexander.]

Folkies have started to pop and rock it up

/// Time was when a “Folk” or “Roots” artist was usually one guy or gal with a guitar or other stringed instrument (Does anyone remember the dulcimer? And what about harpsichord  —now there was a Folk instrument!) up on stage (or possibly just a stool in a corner) all by their lonesome singing about pain and joy from the depths of their souls.  That still happens of course, and there have always been Folk groups as well as solo artists, but these days a lot of savvy Roots acts have realized that there are a lot of benefits to having a combo that includes percussion or bass at least. So they’ve pepped up their delivery to help engage modern audiences, who seem to have far shorter attention spans.

Two cases in point that illustrate the recent trend are appearing tonight within a few blocks of one another on Danforth Ave. in the East York  part of TO.  Both no-cover shows feature acclaimed artists who have no difficulty in weaving magical sonic spells all by themselves, but who, for different reasons, have chosen to add to their sound for these shows.

In the case of Howard Gladstone, who’ll have ace Juno-winning guitar accompanist Tony Quarrington beside him and highly respected Tony LaViola on bass, the early show at Relish (at 2152 Danforth Ave. a block east of Woodbine) will be a kind of tune-up for his imminent return to the studio to record a new album. He plans, he tells us, to share a few of the new tunes that will appear on it. If it’s half as good as his last disc, the wonderful breakthrough Roots & Rain, it’ll become a treasured addition to any Roots-lover’s collection.

A little west, one of Toronto’s best known unknown masters of Folk story-songwriting, Glen Hornblast, will be bringing his high energy rockin’ Roots 5-piece band The Queen Street Cowboys into the storied walls of the 89-year old Linsmore Tavern at 1298 Danforth Ave., a few steps south of the Greenwood subway station at the corner of Linnsmore Crescent.  Membership in the Cowboys tends to fluctuate gig to gig depending on who’s ropin’ and ridin’ elsewhere when, but tonight it includes Dean Cavill on pedal steel guitar, Phil Ciglen on electric six-string, Doug Snow on bass and Greg Lapointe adding percussion. Plus, of course, Glen himself, no doubt reprising songs from his brilliant 2012 debut Once In A Blue Moon album as well as some of the wellspring of new material he’s been sharing with audiences at various shows recently. (He’s also going to be recording another album soon and no doubt will have various guest artists appear, some of whom you might see later this month when he starts his new monthly Songwriter’s Showcase series at Free Times Café on Sun. April 27 —but more about that later.)

The best part of this double whammy of Pop Roots is that you can easily see both shows almost in their entirety, since Gladstone appears from 7-9 and Hornblast’s gig runs 9ish-12 or so, depending on the crowd. I wouldn’t be surprised to see each of these artists, who know one another well, pop in at the other’s show! -Gary 17, www.torontomoon.ca