Glen Hornblast [left] and his Queen St. Cowboys ensemble
had a stellar night at Linsmore Tavern in April -17

To lasso these Cowboys we need a new genre label

Trying to put a label on songwriter Glen Hornblast gets me to thinking about how much really we need another tag other than “Folk”, “Roots” or even “Country” for people who write pithy, stick-to-your-eardrums songs with substance which can be played effectively solo with an acoustic guitar but that are also catchy and lend themselves to presentation by a whole band.

Glen is a masterful solo performer, as anyone who’s ever heard him anywhere can attest. And his songs are master works, with lyrics containing a mix of unassuming sentimentality but also often a nearly political acerbic bite and melodies that are simple but artful and that help fix the songs in the brain long after the performance is done. 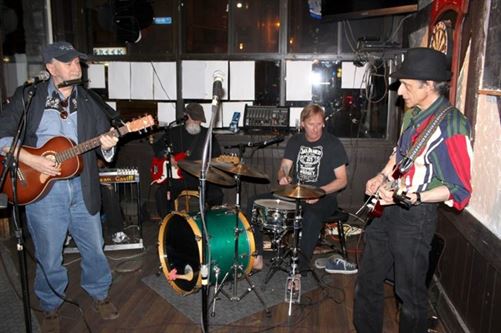 Glen Hornblast [left] and his Queen St. Cowboys ensemble
had a stellar night at Linsmore Tavern in April -17

When he’s backed by his Queen Street Cowboys ensemble, which can contain another two or five musicians, depending on circumstances, the songs show just how rich they are as they expand on sonic wings to become an irresistibly powerful intoxicant. Fellow artist and knowledgeable music biz teacher Paul Cross described the group’s recent performance at Linsmore Tavern in east TO by saying: “it was like Nashville, totally –it completely reminded me of the best of what I saw in Nashville.”

Tonight the group appears at another east-end live music room, Relish at 2152 Danforth Ave., which has become like a mini-Orbit Room of East York with its policy of live music seven days a week and twice or more on Sundays –except Relish also has exceptional food!

There’s no cover for the 8-10 (or more likely 11) show but there will be a tip jar and, of course, you’ll be able to purchase copies of Glen’s magnificent (and sadly so far only) album Once In A Blue Moon .

Maybe if you drop in tonight you can help me figure out exactly what we should call this style of magnificent, accessible and fun music that’s denser than Pop, softer than Rock, less emo than Country, more sensible than Jazz and more balanced than Blues.