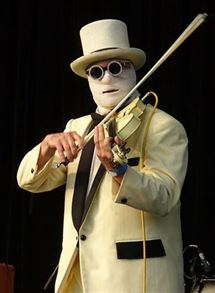 A Canadian and international icon renowned as much for his quirky stage getup (a top hat, dark sunglasses and a face swathed in surgical bandages), pioneering Toronto music Jeff “Nash The Slash” Plewman has died at the age of 66, according to various sources. Cause of death was not immediately known.

When he retired in 2012 Slash wrote a long screed in which he thanked his many fans and those who enabled his career, which included the first use of a drum machine on an album in 1978. He is regarded by some as having introduced electronica/dance music to the local scene.

A violinist who was also adept on other instruments, his music was all about sensation and energy, offering surprising twists and turns that had many scratching their heads. He said in his farewell screed: “it was my intention to shock, but not offend.”

Although he had been a performing musician before becoming Nash The Slash (a reference, it is believed, to a character of that name who is encountered by Laurel and Hardy in the 1927 silent film comedy “Do Detectives Think”, Plewman first appeared as Nash in the late 70s wearing a tuxedo, top hat and sunglasses. He added the bandages in 1979, when he appeared on stage in TO wearing them, dipped in phosphorous paint, at an anti-nukes concert following the Three Mile Island meltdown –they were such a hit that he kept them and they became his signature performance attire.

You can read the full transcript of Nash’s 2012 farewell post at http://www.nashtheslash.com/

A video of Nash in concert performing “Dead Man’s Curve” appears at https://www.youtube.com/watch?v=m229hY3Onak