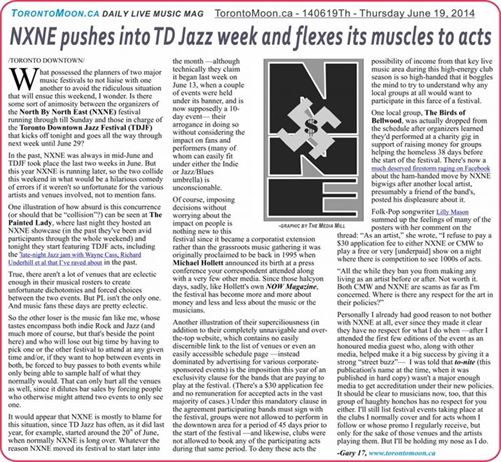 What possessed the planners of two major music festivals to not liaise with one another to avoid the ridiculous situation that will ensue this weekend, I wonder. Is there some sort of animosity between the organizers of the North By North East (NXNE) festival running through till Sunday and those in charge of the Toronto Downtown Jazz Festival (TDJF) that kicks off tonight and goes all the way through next week until June 29?

In the past, NXNE was always in mid-June and TDJF took place the last two weeks in June. But this year NXNE is running later, so the two collide this weekend in what would be a hilarious comedy of errors if it weren’t so unfortunate for the various artists and venues involved, not to mention fans.

One illustration of how absurd is this concurrence (or should that be “collision”?) can be seen at The Painted Lady, where last night they hosted an NXNE showcase (in the past they’ve been avid participants through the whole weekend) and tonight they start featuring TDJF acts, including the late-night Jazz jam with Wayne Cass, Richard Underhill et al that I’ve raved about in the past.

True, there aren’t a lot of venues that are eclectic enough in their musical rosters to create unfortunate dichotomies and forced choices between the two events. But PL isn’t the only one. And music fans these days are pretty eclectic.

So the other loser is the music fan like me, whose tastes encompass both indie Rock and Jazz (and much more of course, but that’s beside the point here) and who will lose out big time by having to pick one or the other festival to attend at any given time and/or, if they want to hop between events in both, be forced to buy passes to both events while only being able to sample half of what they normally would. That can only hurt all the venues as well, since it dilutes bar sales by forcing people who otherwise might attend two events to only see one.

Original graphic by The Media Mill

It would appear that NXNE is mostly to blame for this situation, since TD Jazz has often, as it did last year, for example, started around the 20th of June, when normally NXNE is long over. Whatever the reason NXNE moved its festival to start later into the month —although technically they claim it began last week on June 13, when a couple of events were held under its banner, and is now supposedly a 10-day event— their arrogance in doing so without considering the impact on fans and performers (many of whom can easily fit under either the Indie or Jazz/Blues umbrella) is unconscionable.

Of course, imposing decisions without worrying about the impact on people is nothing new to this festival since it became a corporatist extension rather than the grassroots music gathering it was originally proclaimed to be back in 1995 when Michael Hollett announced its birth at a press conference your correspondent attended along with a very few other media. Since those halcyon days, sadly, like Hollett’s own NOW Magazine, the festival has become more and more about money and less and less about the music or the musicians.

Another illustration of their superciliousness (in addition to their completely unnavigable and over-the-top website, which contains no easily discernible link to the list of venues or even an easily accessible schedule page —instead dominated by advertising for various corporate-sponsored events) is the imposition this year of an exclusivity clause for the bands that are paying to play at the festival. (There’s a $30 application fee and no remuneration for accepted acts in the vast majority of cases.) Under this mandatory clause in the agreement participating bands must sign with the festival, groups were not allowed to perform in the downtown area for a period of 45 days prior to the start of the festival —and likewise, clubs were not allowed to book any of the participating acts during that same period. To deny these acts the possibility of income from that key live music area during this high-energy club season is so high-handed that it boggles the mind to try to understand why any local groups at all would want to participate in this farce of a festival.

One local group, The Birds of Bellwood, was actually dropped from the schedule after organizers learned they’d performed at a charity gig in support of raising money for groups helping the homeless 38 days before the start of the festival. There’s now a much deserved firestorm raging on Facebook about the ham-handed move by NXNE bigwigs after another local artist, presumably a friend of the band’s, posted his displeasure about it.

Folk-Pop songwriter Lilly Mason summed up the feelings of many of the posters with her comment on the thread: “As an artist,” she wrote, “I refuse to pay a $30 application fee to either NXNE or CMW to play a free or very [underpaid] show on a night where there is competition to see 1000s of acts.

“All the while they ban you from making any living as an artist before or after. Not worth it. Both CMW and NXNE are scams as far as I’m concerned. Where is there any respect for the art in their policies?”

Personally I already had good reason to not bother with NXNE at all, ever since they made it clear they have no respect for what I do when —after I attended the first few editions of the event as an honoured media guest who, along with other media, helped make it a big success by giving it a strong “street buzz”—  I was told that to-nite (this publication’s name at the time, when it was published in hard copy) wasn’t a major enough media to get accreditation under their new policies. It should be clear to musicians now, too, that this group of haughty honchos has no respect for you either. I’ll still list festival events taking place at the clubs I normally cover and for acts whom I follow or whose promo I regularly receive, but only for the sake of those venues and the artists playing them. But I’ll be holding my nose as I do.

9> The Haret with Andru Bernis @ The Local, 396 Roncesvalles Ave., TO West