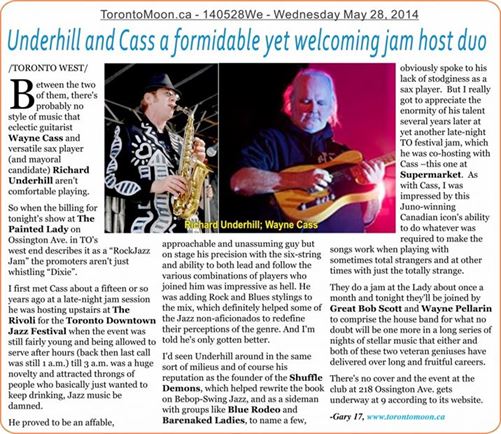 /TORONTO WEST/ Between the two of them, there’s probably no style of music that eclectic guitarist Wayne Cass and versatile sax player (and mayoral candidate) Richard Underhill aren’t comfortable playing. So when the billing for tonight’s show at The Painted Lady on Ossington Ave. in TO’s west end describes it as a “RockJazz Jam” the promoters aren’t just whistling “Dixie”.

I first met Cass about a fifteen or so years ago at a late-night jam session he was hosting upstairs at The Rivoli for the Toronto Downtown Jazz Festival when the event was still fairly young and being allowed to serve after hours (back then last call was still 1 a.m.) till 3 a.m. was a huge novelty and attracted throngs of people who basically just wanted to keep drinking, Jazz music be damned. He proved to be an affable, approachable and unassuming guy but on stage his precision with the six-string and ability to both lead and follow the various combinations of players who joined him was impressive as hell. He was adding Rock and Blues stylings to the mix, which definitely helped some of the Jazz non-aficionados to redefine their perceptions of the genre. And I’m told he’s only gotten better.

I’d seen Underhill around in the same sort of milieus and of course his reputation as the founder of the Shuffle Demons, which helped rewrite the book on Bebop-Swing Jazz, and as a sideman with groups like Blue Rodeo and Barenaked Ladies, to name a few, obviously spoke to his lack of stodginess as a sax player.  But I really got to appreciate the enormity of his talent several years later at yet another late-night TO festival jam, which he was cohosting with Cass –this one at Supermarket.  As with Cass, I was impressed by this Juno-winning Canadian icon’s ability to do whatever was required to make the songs work when playing with sometimes total strangers and at other times with just the totally strange. They do a jam at the Lady about once a month and tonight they’ll be joined by Great Bob Scott and Wayne Pellarin to comprise the house band for what no doubt will be one more in a long series of nights of stellar music that either and both of these two veteran geniuses have delivered over long and fruitful careers. There’s no cover and the event at the club at 218 Ossington Ave. gets underway at 9 according to its website. -Gary 17, www.torontomoon.ca

Listings preceded by an asterisk (*) are repeating weekly events. Admission prices followed by a slash and minus (/-) after the amount indicates door charge with availability of cheaper rates for some purchases. /+ indicates stated price is minimum. Names of subscribers appear in bold and include a live link to their websites where applicable. Advertisers’ listings are in larger type, include live link to website and also have ad icon included in listings.