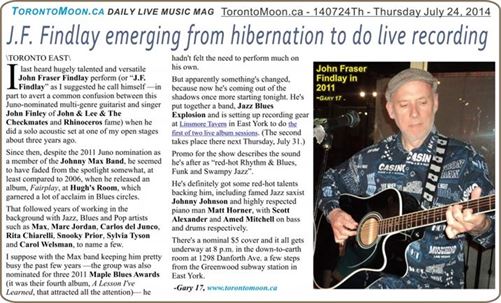 J.F. Findlay emerging from hibernation to do live recording

I last heard hugely talented and versatile John Fraser Findlay perform (or “J.F. Findlay” as I suggested he call himself —in part to avert a common confusion between this Juno-nominated multi-genre guitarist and singer John Finley of John & Lee & The Checkmates and Rhinoceros fame) when he did a solo acoustic set at one of my open stages about three years ago.

Since then, despite the 2011 Juno nomination as a member of the Johnny Max Band, he seemed to have faded from the spotlight somewhat, at least compared to 2006, when he released an album, Fairplay, at Hugh’s Room, which garnered a lot of acclaim in Blues circles.

That followed years of working in the background with Jazz, Blues and Pop artists such as Max, Marc Jordan, Carlos del Junco, Rita Chiarelli, Snooky Prior, Sylvia Tyson and Carol Welsman, to name a few.

I suppose with the Max band keeping him pretty busy the past few years —the group was also nominated for three 2011 Maple Blues Awards (it was their fourth album, A Lesson I’ve Learned, that attracted all the attention)— he hadn’t felt the need to perform much on his own.

But apparently something’s changed, because now he’s coming out of the shadows once more starting tonight. He’s put together a band, Jazz Blues Explosion and is setting up recording gear at Linsmore Tavern in East York to do the first of two live album sessions. (The second takes place there next Thursday, July 31.)

Promo for the show describes the sound he’s after as “red-hot Rhythm & Blues, Funk and Swampy Jazz”.

There’s a nominal $5 cover and it all gets underway at 8 p.m. in the down-to-earth room at 1298 Danforth Ave. a few steps from the Greenwood subway station in East York.