Open mics come and go and few seem to be able to put in place all the right elements to last for more than a year or so, with the vast majority fizzling long before that.

But there’s good reason to think that with today’s debut of a new Saturday afternoon 2-5ish open mic being hosted by Brian Gladstone, we may be seeing the laying of a foundation for many years of playing and social interacting at this weekly event. This one seems to have all the right ingredients in place (save one) so I’d be expecting today to be somewhat historic. 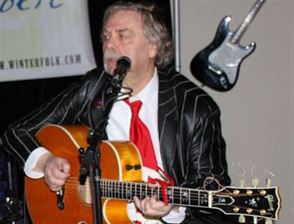 For starters, Dr. B’s Acoustic Medicine Show has got Gladstone as the host. As not only an accomplished open stage presenter (longtime readers will recognize the name of the event as one he used for a few years while hosting at defunct Renaissance Café in East TO) but also, of course the founder and executive director of the now iconic Winterfolk Festival, he knows and/or is known by everyone who is anyone (or wants to be someone) in the TO Roots realm.

Secondly, it’s taking place at the famed Free Times Café at 320 College Ave. a little east of Bathurst near the heart of TO’s creative Kensington Market community from which springs so much great new music.

Free Times has several advantages over the venue at which Gladstone doggedly tried over several months earlier this year to get a similar Sat. afternoon event happening, Black Swan Tavern on Danforth Ave. For one thing, the small, intimate and legendary back room at Free Times is set apart from the rest of the club so music is its only focus. Secondly, it’s the perfect size, accommodating around 40 people comfortably. And finally, it not only serves food —a must for any show that’s taking place during daylight hours and particularly one that includes an older crowd that doesn’t drink like it’s still 1999— its cuisine is varied, highly regarded and not over-the-top expensive.

The only sticking point that could interfere with this being a rip-roaring success is the financial arrangements. For one thing, Gladstone says he’s counting on volunteers to help do sound every week (in exchange for a little longer set time and maybe a couple of drinks) and that the club isn’t actually paying him to put on the show.

I suppose from Brian’s point of view there’s a certain logic to doing the show gratis simply because it’s a great funnel to expose him to aspiring musicians who might be suitable for Winterfolk (even though there’s no formal connection) or who may be in need of some of the excellent website creation/management services (he’s the designer of this site, for example) and artistic management services he provides —but obviously the amount of what he may receive in that way is somewhat tenuous.

Meanwhile, Gladstone estimates that between putting on the actual show and doing promotion, set up, etc. he’ll be putting in a minimum of 10 hours per week and notes that “my time has to have some value”. Indeed, even at $15 per hour it would mean that somewhere along the line $150 per week needs to be generated to keep this show happily bouncing along —more if he’s to eventually hire a regular soundman for it.

He’s loathe to charge a cover (as artists normally do when putting on shows at Free Times) and I can certainly understand that —you’re already asking people to spend money to come out and play for free and to expect them to pay an additional fee to get in the door, while not inherently an unfair proposition as any experienced Nashville promoter might tell you, is asking a bit much of TO’s notoriously tight-fisted musical community, where everyone expects everything for free. [Like the freeloaders happily reading this article who won’t support Toronto Moon with a subscription —but I digress.]

So for starters, at least, Brian will simply be putting out a donations jar, though says he won’t be mentioning it from the stage. No doubt initially people will be generous in contributing in order to thank and encourage him in the new endeavour. And providing that continues to be the case —or if the club or a sponsor can be persuaded to kick in some bucks— we could today be witnessing the beginning of a new era for acoustic/Roots musicians in TO.