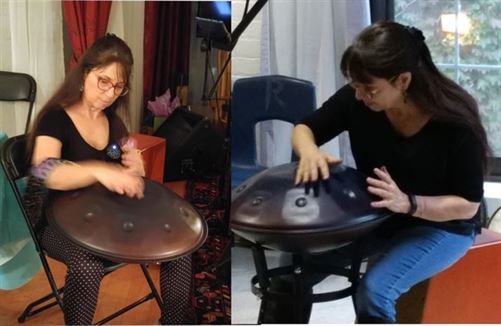 There are those who vehemently deny that they even exist, but Toronto percussionist Darlene Sacks says that this afternoon she will offer irrefutable proof that not only is the handpan drum (or, more technically, simply the “handpan,” for reasons detailed below) actually real but that it’s also a legitimate musical instrument.

She’ll be demonstrating how her flying-saucer-shaped convex steel instrument —with crater-like sonic dimples that make it look and sound like it just came through a meteor shower— works as not just accompaniment but as a lead instrument when she does the featured set at today’s last 2016 edition of the monthly Lazy Cat Open Stage in east TO.

A sort of second cousin once-removed from the steelpan drums of Trinidad and Tobago origin, the handpan, invented by Swiss Jazz/steelpan player Reto Weber, started out life being known as a “Hang” when it was introduced by a Swiss company in 2001, and was itself basically the obverse of the steelpan.

Unlike the steelpan, which has a concave (shaped like a cave) surface with various indentations for tonal note variations and is played by striking it with sticks, the handpan is convex (like your eyeball) and features many double-dimples, which, like its surface, are played with the hand.  The indentations are arrayed as a scale of notes, with the little inner depressions adding an octave or various effects, it seems.

Invasion of the handpans! -COURTESY AOXOA.CA

According to the website www.didgeproject.com, before they stopped production of them in 2007, the PanArt company that first released the instrument had secured rights to the Hang name, so starting around then subsequent versions of the unusual looking percussive construction became known as the handpan —which is essentially understood to mean “steel pan played by hand.”

Many purists, however, reject the “handpan” label and the PanArt owners are said to resent it, while some cultural traditionalists in the islands from whence sprang the steelpan note that “pan” is also used to denote that culture and argue the word should not be used for any instrument other than the traditional steelpan.  So yes, Virginia, some people believe the handpan does not exist!

Nevertheless, there is today a wide array of such instruments available, although there is said to be a waiting list for products from the dozen or so manufacturers, making them not cheap to buy —and apparently as a result there’s even a market for “knockoff” counterfeit handpans of inferior quality!

As you can hear on videos on YouTube, the sounds that this instrument (which can also be played upside down) produces seem to fit its spacecraft-looking shape, resonating ethereal, other-worldly vibrations and pitches which can add effects to others’ music or be used to create trance-like riffs and rolls of its own —similar in impact in that way, it would seem, to the didgeridoo. It can be supported on a stand or secured on the lap with a strap, and Sacks has performed on both versions at Lazy Cat in the past.

Sacks takes the stage about an hour into today’s 3-5:30 session, for which there’s no cover and snacks are available for donations to help cover the costs of operating the community centre in which its held.  The room is inside the co-op housing complex at 100 Bain Street in Riverdale, with the entrance off Sparkhall Street —look for the building with the smokestack on top.