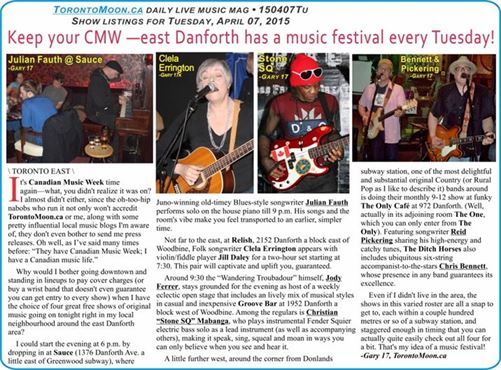 It’s Canadian Music Week time again—what, you didn’t realize it was on? I almost didn’t either, since the oh-too-hip nabobs who run it not only won’t accredit TorontoMoon.ca or me, along with some pretty influential local music blogs I’m aware of, they don’t even bother to send me press releases. Oh well, as I’ve said many times before: “They have Canadian Music Week; I have a Canadian music life.”

Why would I bother going downtown and standing in lineups to pay cover charges (or buy a wrist band that doesn’t even guarantee you can get entry to every show) when I have the choice of four great free shows of original music going on tonight right in my local neighbourhood around the east Danforth area?

I could start the evening at 6 p.m. by dropping in at Sauce (1376 Danforth Ave. a little east of Greenwood subway), where Juno-winning old-timey Blues-style songwriter Julian Fauth performs solo on the house piano till 9 p.m. His songs and the room’s vibe make you feel transported to an earlier, simpler time.

Not far to the east, at Relish, 2152 Danforth a block east of Woodbine, Folk songwriter Clela Errington appears with violin/fiddle player Jill Daley for a two-hour set starting at 7:30. This pair will captivate and uplift you, guaranteed.

Around 9:30 the “Wandering Troubadour” himself, Jody Ferrer, stays grounded for the evening as host of a weekly eclectic open stage that includes an lively mix of musical styles in casual and inexpensive Groove Bar at 1952 Danforth a block west of Woodbine. Among the regulars is Christian “Stone SQ” Mabanga, who plays instrumental Fender Squier electric bass solo as a lead instrument (as well as accompanying others), making it speak, sing, squeal and moan in ways you can only believe when you see and hear it.

A little further west, around the corner from Donlands subway station, one of the most delightful and substantial original Country (or Rural Pop as I like to describe it) bands around is doing their monthly 9-12 show at funky The Only Café at 972 Danforth. (Well, actually in its adjoining room The One, which you can only enter from The Only). Featuring songwriter Reid Pickering sharing his high-energy and catchy tunes, The Ditch Horses also includes ubiquitous six-string accompanist-to-the-stars Chris Bennett, whose presence in any band guarantees its excellence.

Even if I didn’t live in the area, the shows in this varied roster are all a snap to get to, each within a couple hundred metres or so of a subway station, and staggered enough in timing that you can actually quite easily check out all four for a bit. That’s my idea of a music festival!

9> The Ditch Horses featuring Reid Pickering and Chris Bennett @ The Only Café, 972 Danforth Ave., TO East