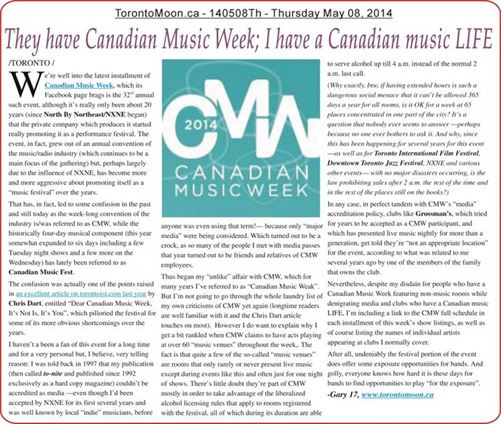 They have Canadian Music Week; I have a Canadian music LIFE

We’re well into the latest installment of Canadian Music Week, which its Facebook page brags is the 32nd annual such event, although it’s really only been about 20 years (since North By Northeast/NXNE began) that the private company which produces it started really promoting it as a performance festival. The event, in fact, grew out of an annual convention of the music/radio industry (which continues to be a main focus of the gathering) but, perhaps largely due to the influence of NXNE, has become more and more aggressive about promoting itself as a “music festival” over the years.

That has, in fact, led to some confusion in the past and still today as the week-long convention of the industry is/was referred to as CMW, while the historically four-day musical component (this year somewhat expanded to six days including a few Tuesday night shows and a few more on the Wednesday) has lately been referred to as Canadian Music Fest.

The confusion was actually one of the points raised in an excellent article on torontoist.com last year by Chris Dart, entitled “Dear Canadian Music Week, It’s Not Is, It’s You”, which pilloried the festival for some of its more obvious shortcomings over the years.

I haven’t a been a fan of this event for a long time and for a very personal but, I believe, very telling reason: I was told back in 1997 that my publication (then called to-nite and published since 1992 exclusively as a hard copy magazine) couldn’t be accredited as media –even though I’d been accepted by NXNE for its first several years and was well known by local “indie” musicians, before anyone was even using that term!– because only “major media” were being considered. Which turned out to be a crock, as so many of the people I met with media passes that year turned out to be friends and relatives of CMW employees.

Thus began my “unlike” affair with CMW, which for many years I’ve referred to as “Canadian Music Weak”. But I’m not going to go through the whole laundry list of my own criticisms of CMW yet again (longtime readers are well familiar with it and the Chris Dart article touches on most).  However I do want to explain why I get a bit rankled when CMW claims to have acts playing at over 60 “music venues” throughout the week,. The fact is that quite a few of the so-called “music venues” are rooms that only rarely or never present live music except during events like this and often just for one night of shows. There’s little doubt they’re part of CMW mostly in order to take advantage of the liberalized alcohol licensing rules that apply to rooms registered with the festival, all of which during its duration are able to serve alcohol up till 4 a.m. instead of the normal 2 a.m. last call.

(Why exactly, btw, if having extended hours is such a dangerous social menace that it can’t be allowed 365 days a year for all rooms, is it OK for a week at 65 places concentrated in one part of the city? It’s a question that nobody ever seems to answer –perhaps because no one ever bothers to ask it. And why, since this has been happening for several years for this event –as well as for Toronto International Film Festival, Downtown Toronto Jazz Festival, NXNE and various other events– with no major disasters occurring, is the law prohibiting sales after 2 a.m. the rest of the time and in the rest of the places still on the books?)

In any case, in perfect tandem with CMW’s “media” accreditation policy, clubs like Grossman’s, which tried for years to be accepted as a CMW participant, and which has presented live music nightly for more than a generation, get told they’re “not an appropriate location” for the event, according to what was related to me several years ago by one of the members of the family that owns the club.

Nevertheless, despite my disdain for people who have a Canadian Music Week featuring non-music rooms while denigrating media and clubs who have a Canadian music LIFE, I’m including a link to the CMW full schedule in each installment of this week’s show listings, as well as of course listing the names of individual artists appearing at clubs I normally cover.

After all, undeniably the festival portion of the event does offer some exposure opportunities for bands. And golly, everyone knows how hard it is these days for bands to find opportunities to play “for the exposure”.