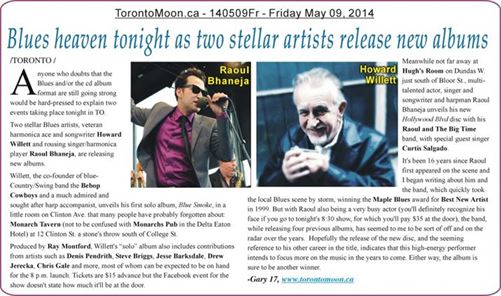 Anyone who doubts that the Blues and/or the cd album format are still going strong would be hard-pressed to explain two events taking place tonight in TO.

Willett, the co-founder of blue-Country/Swing band the Bebop Cowboys and a much admired and sought after harp accompanist, unveils his first solo album, Blue Smoke, in a little room on Clinton Ave. that many people have probably forgotten about: Monarch Tavern (not to be confused with Monarchs Pub in the Delta Eaton Hotel) at 12 Clinton St. a stone’s throw south of College St.

Produced by Ray Montford, Willett’s “solo” album also includes contributions from artists such as Denis Pendrith, Steve Briggs, Jesse Barksdale, Drew Jerecka, Chris Gale and more, most of whom can be expected to be on hand for the 8 p.m. launch. Tickets are $15 advance but the Facebook event for the show doesn’t state how much it’ll be at the door.

It’s been 16 years since Raoul first appeared on the scene and I began writing about him and the band, which quickly took the local Blues scene by storm, winning the Maple Blues award for Best New Artist in 1999. But with Raoul also being a very busy actor (you’ll definitely recognize his face if you go to tonight’s 8:30 show, for which you’ll pay $35 at the door), the band, while releasing four previous albums, has seemed to me to be sort of off and on the radar over the years.  Hopefully the release of the new disc, and the seeming reference to his other career in the title, indicates that this high-energy performer intends to focus more on the music in the years to come. Either way, the album is sure to be another winner.