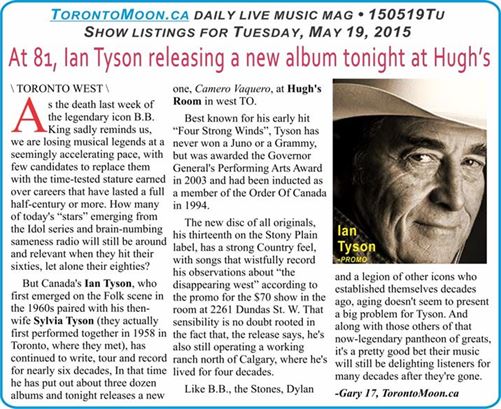 As the death last week of the legendary icon B.B. King sadly reminds us, we are losing musical legends at a seemingly accelerating pace, with few candidates to replace them with the time-tested stature earned over careers that have lasted a full half-century or more. How many of today’s “stars” emerging from the Idol series and brain-numbing sameness radio will still be around and relevant when they hit their sixties, let alone their eighties?

But Canada’s Ian Tyson, who first emerged on the Folk scene in the 1960s paired with his then-wife Sylvia Tyson (they actually first performed together in 1958 in Toronto, where they met), has continued to write, tour and record for nearly six decades, In that time he has put out about three dozen albums and tonight releases a new one, Camero Vaquero, at Hugh’s Room in west TO.

Best known for his early hit “Four Strong Winds”, Tyson has never won a Juno or a Grammy, but was awarded the Governor General’s Performing Arts Award in 2003 and had been inducted as a member of the Order Of Canada in 1994.

The new disc of all originals, his thirteenth on the Stony Plain label, has a strong Country feel, with songs that wistfully record his observations about “the disappearing west” according to the promo for the $70 show in the room at 2261 Dundas St. W. That sensibility is no doubt rooted in the fact that, the release says, he’s also still operating a working ranch north of Calgary, where he’s lived for four decades.

Like B.B., the Stones, Dylan and a legion of other icons who established themselves decades ago, aging doesn’t seem to present a big problem for Tyson. And along with those others of that now-legendary pantheon of greats, it’s a pretty good bet their music will still be delighting listeners for many decades after they’re gone.