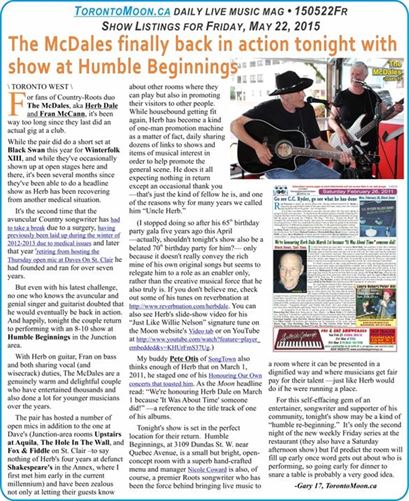 For fans of Country-Roots duo The McDales, aka Herb Dale and Fran McCann, it’s been way too long since they last did an actual gig at a club.

While the pair did do a short set at Black Swan this year for Winterfolk XIII, and while they’ve occasionally shown up at open stages here and there, it’s been several months since they’ve been able to do a headline show as Herb has been recovering from another medical situation.

It’s the second time that the avuncular Country songwriter has had to take a break due to a surgery, having previously been laid up during the winter of 2012-2013 due to medical issues and later that year retiring from hosting the Thursday open mic at Dave’s On St. Clair he had founded and ran for over seven years.

But even with his latest challenge, no one who knows the avuncular and genial singer and guitarist doubted that he would eventually be back in action. And happily, tonight the couple return to performing with an 8-10 show at Humble Beginnings in the Junction area.

With Herb on guitar, Fran on bass and both sharing vocal (and wisecrack) duties, The McDales are a genuinely warm and delightful couple who have entertained thousands and also done a lot for younger musicians over the years.

The pair has hosted a number of open mics in addition to the one at Dave’s (Junction-area rooms Upstairs at Aquila, The Hole In The Wall, and Fox & Fiddle on St. Clair –to say nothing of Herb’s four years at defunct Shakespeare’s in the Annex, where I first met him early in the current millennium) and have been zealous not only at letting their guests know about other rooms where they can play but also in promoting their visitors to other people. While housebound getting fit again, Herb has become a kind of one-man promotion machine as a matter of fact, daily sharing dozens of links to shows and items of musical interest in order to help promote the general scene. He does it all expecting nothing in return except an occasional thank you —that’s just the kind of fellow he is, and one of the reasons why for many years we called him “Uncle Herb.”

(I stopped doing so after his 65th birthday party gala five years ago this April —actually, shouldn’t tonight’s show also be a belated 70th birthday party for him?— only because it doesn’t really convey the rich mine of his own original songs but seems to relegate him to a role as an enabler only, rather than the creative musical force that he also truly is. If you don’t believe me, check out some of his tunes on reverbnation at http://www.reverbnation.com/herbdale. You can also see Herb’s slide-show video for his “Just Like Willie Nelson” signature tune on the Moon website’s Video tab or on YouTube at: http://www.youtube.com/watch?feature=player_embedded&v=KHUrFmS37Ug.)

My buddy Pete Otis of SongTown also thinks enough of Herb that on March 1, 2011, he staged one of his Honouring Our Own concerts that toasted him. As the Moon headline read: “We’re honouring Herb Dale on March 1 because ‘It Was About Time’ someone did!” —a reference to the title track of one of his albums.

Tonight’s show is set in the perfect location for their return.  Humble Beginnings, at 3109 Dundas St. W. near Quebec Avenue, is a small but bright, open-concept room with a superb hand-crafted menu and manager Nicole Coward is also, of course, a premier Roots songwriter who has been the force behind bringing live music to a room where it can be presented in a dignified way and where musicians get fair pay for their talent —just like Herb would do if he were running a place.

For this self-effacing gem of an entertainer, songwriter and supporter of his community, tonight’s show may be a kind of “humble re-beginning.”  It’s only the second night of the new weekly Friday series at the restaurant (they also have a Saturday afternoon show) but I’d predict the room will fill up early once word gets out about who is performing, so going early for dinner to snare a table is probably a very good idea.

10> Give Me Something Beautiful @ Tranzac Club (Southern Cross), 292 Brunswick Ave., TO