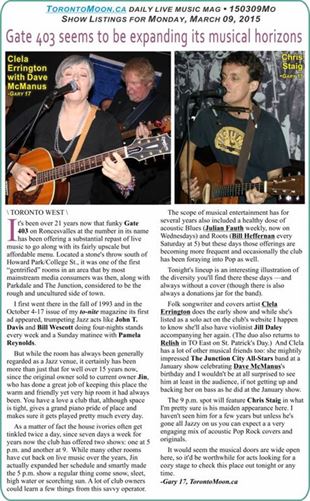 It’s been over 21 years now that funky Gate 403 on Roncesvalles at the number in its name has been offering a substantial repast of live music to go along with its fairly upscale but affordable menu. Located a stone’s throw south of Howard Park/College St., it was one of the first “gentrified” rooms in an area that by most mainstream media consumers was then, along with Parkdale and The Junction, considered to be the rough and uncultured side of town.

I first went there in the fall of 1993 and in the October 4-17 issue of my to-nite magazine its first ad appeared, trumpeting Jazz acts like John T. Davis and Bill Wescott doing four-nights stands every week and a Sunday matinee with Pamela Reynolds.

But while the room has always been generally regarded as a Jazz venue, it certainly has been more than just that for well over 15 years now, since the original owner sold to current owner Jin, who has done a great job of keeping this place the warm and friendly yet very hip room it had always been. You have a love a club that, although space is tight, gives a grand piano pride of place and makes sure it gets played pretty much every day.

As a matter of fact the house ivories often get tinkled twice a day, since seven days a week for years now the club has offered two shows: one at 5 p.m. and another at 9.  While many other rooms have cut back on live music over the years, Jin actually expanded her schedule and smartly made the 5 p.m. show a regular thing come snow, sleet, high water or scorching sun. A lot of club owners could learn a few things from this savvy operator.

The scope of musical entertainment has for several years also included a healthy dose of acoustic Blues (Julian Fauth weekly, now on Wednesdays) and Roots (Bill Heffernan every Saturday at 5) but these days those offerings are becoming more frequent and occasionally the club has been foraying into Pop as well.

Tonight’s lineup is an interesting illustration of the diversity you’ll find there these days —and always without a cover (though there is also always a donations jar for the band).

Folk songwriter and covers artist Clela Errington does the early show and while she’s listed as a solo act on the club’s website I happen to know she’ll also have violinist Jill Daley accompanying her again. (The duo also returns to Relish in TO East on St. Patrick’s Day.)  And Clela has a lot of other musical friends too: she mightily impressed The Junction City All-Stars band at a January show celebrating Dave McManus’s birthday and I wouldn’t be at all surprised to see him at least in the audience, if not getting up and backing her on bass as he did at the January show.

The 9 p.m. spot will feature Chris Staig in what I’m pretty sure is his maiden appearance here. I haven’t seen him for a few years but unless he’s gone all Jazzy on us you can expect a a very engaging mix of acoustic Pop Rock covers and originals.

It would seem the musical doors are wide open here, so it’d be worthwhile for acts looking for a cozy stage to check this place out tonight or any time. 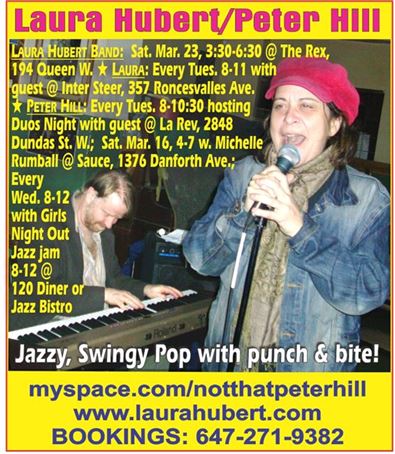