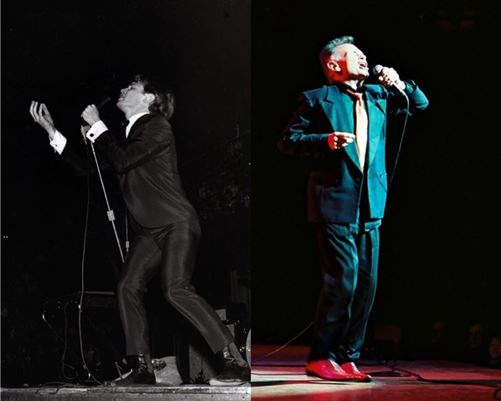 John Finley then and now. -SUPPLIED

When it comes to musical legacies, few Toronto performers can match the longevity, stamina and verve of R&B singer John Finley, who is being honoured for fifty years of musical excellence at a sold-out show on Sunday, October 25.

The Honouring Our Own tribute show, being put on by Pete Otis and his SongTown music services company, takes place from 5-9 p.m. at the Seven44 club (formerly Chick’N’Deli) and features some of the few other dynamic veterans who can measure up to Finley’s accomplishments.

His storied career actually began in 1964 and includes fronting for iconic 60s Toronto Sound bands Jon & Lee & The Checkmates and Rhinoceros as well as numerous special appearances over the past five decades, such as a supporting set for The Rolling Stones and playing at the official opening of the then-new Toronto City Hall in 1965.

Finley had earlier begun singing with a local band known as The Tempests but was recruited into The Checkmates in 1964 at 19 years of age and has never looked back since. The Checkmates made their debut at a 1965 concert at Massey Hall opening for famed proto-Steppenwolf band The Sparrows, became staples of the Yorkville and Yonge St. scenes, opened for the Stones at Maple Leaf Gardens and did the city hall show, where fans excited by their performance nearly caused a riot, leading then-mayor Phil Givens to try to stop the show.

Finley, along with Checkmates keyboardist Michael Fonfara, went on to join Rhinoceros, which released three critically acclaimed albums through Elektra Records, hit the Billboard charts with instrumental track “Apricot Brandy”, toured the U.S. and still has fans thanks to a few YouTube videos of the group.

After Rhinoceros split up in the early 70s Finley and other members of the group created the band Blackstone, after which he went on to divide his talents and time between studio recording, songwriting, producing and singing Gospel and R&B with a number of other artists.  His songwriting prowess is demonstrated by the fact that his tune “I Will Serenade You”, recorded by Three Dog Night as “Let Me Serenade You”, became a Top 20 U.S. hit in 1973 and in 1990 his “Why Can’t I Fall In Love” was covered for a movie soundtrack.

These days Finley, who has continued to be involved in the Los Angeles music scene since making connections there in his Checkmates/Rhinoceros days, fronts an L.A. combo known as SoulBop as well as continuing to do collaborations, production and studio work for a variety of established artists on both sides of the border.

Co-hosted by Ken Stowar of CIUT 89.5FM and Jaymz B and John Donabie of JAZZ FM81, the bill also includes performances by Quisha Wint, Eric Mercury, Debbie Fleming and Otis.

For the full lineup see www.songtown.ca.