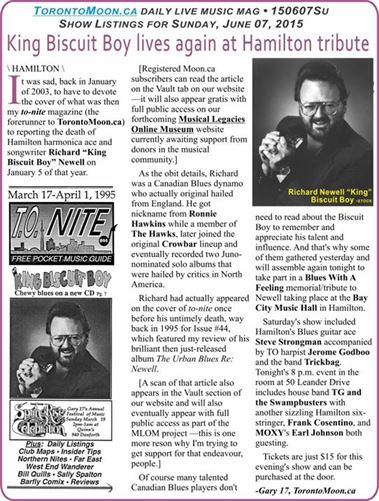 It was sad, back in January of 2003, to have to devote the cover of what was then my to-nite magazine (the forerunner to TorontoMoon.ca) to reporting the death of Hamilton harmonica ace and songwriter Richard “King Biscuit Boy” Newell on January 5 of that year.

[Registered Moon.ca subscribers can read the article on the vault tab on our website —it will also appear gratis with full public access on our forthcoming Musical Legacies Online Museum website currently awaiting support from donors in the musical community.]

As the obit details, Richard was a Canadian Blues dynamo who actually original hailed from England. He got nickname from Ronnie Hawkins while a member of The Hawks, later joined the original Crowbar lineup and eventually recorded two Juno-nominated solo albums that were hailed by critics in North America.

Richard had actually appeared on the cover of to-nite once before his untimely death, way back in 1995 for Issue #44, which featured my review of his brilliant then just-released album The Urban Blues Re: Newell.

[A scan of that article also appears in the Vault section of our website and will also eventually appear with full public access as part of the MLOM project —this is one more reson why I’m trying to get support for that endeavour, people.]

Of course many talented Canadian Blues players don’t need to read about the Biscuit Boy to remember and appreciate his talent and influence. And that’s why some of them gathered yesterday and will assemble again tonight to take part in a Blues With A Feeling memorial/tribute to Newell taking place at the Bay City Music Hall in Hamilton.

Tickets are just $15 for this evening’s show and can be purchased at the door.