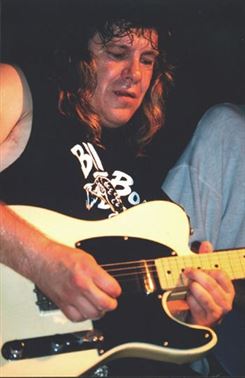 It’s been reliably reported that one-of-a-kind musician, entertainer and promoter Peter “SAB” Sabourin of Pembroke, Ontario has passed away, presumably due at least in part to the cancer with which he was diagnosed a few years ago.

As reported in the Timmins Press in February of last year, when SAB did a stellar “comeback” show featuring all-star guests, it appeared the cancer had then gone into remission following an arduous series of treatments.

Nicknamed “The King Of The North” by Ronnie Hawkins (in whose new band he performed early in the new century and with whom he had a long association and friendship) Sab was also the founder of a music festival and a relentless promoter of other musicians.

At the same time as he was dealing with the cancer, in November of 2013 his house burned to the ground, prompting musicians far and wide to gather to help raise funds for him, as reported, also in the Timmins Press, in December of that year.

He was an honoured and respected member of the northern Ontario music community, as detailed in a story from the local Pembroke paper in February of 2013, and for several years in the late 90s and early aughties was also a regular feature on the Mississauga and Etobicoke music scenes. That was when I first met him and got to know and appreciate him as both a person and a performer.

I did a cover story on SAB for Issue #207 of to-nite magazine, which came out in May of 2001 —just a few months before the 9/11 New York attacks that prompted him to get Hawkins, among many others, to participate in a marathon benefit to raise funds for first responders and helping victims at the Touchdowns club mentioned in the article. [Registered Subscribers can read the article as a text document in our Vault section of the site. (Also, once enough donations have been received to get the Musical Legacies Online Museum project up and running it will also appear there for anyone to read.)]

A larger than life character with a hugely generous spirit, SAB sported a top hat on his head, snakeskin boots on his feet, slung a guitar in his hands and wore his heart on his sleeve. As the late poet Reggie Bovaird would have said: “We shan’t see his likes pass this way again.”

PLEASE DONATE TO THE TorontoMoon.ca PROJECT DESCRIBED BELOW TO HELP KEEP THE MEMORY OF MUSICIANS LIKE SAB ALIVE FOR THOSE WHO KNEW AND LOVED HIM AND FOR FUTURE GENERATIONS. Donate online or contact Gary 17 at [email protected]