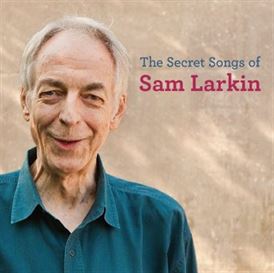 It’s not yet been 16 months since Toronto Folk balladeer Sam Larkin passed away, as we reported on October 29, 2021. But while his bodily flame may have gone out, his soul —his musical legacy— shows no sign of being extinguished any time soon.

Last April a group of talented songwriting pals of Larkin’s who knew him through the weekly Wednesday Fat Albert’s Coffee House open stage at which he was a prized icon, put together a night of performing Larkin tunes to raise money to finance a recorded album of his music to augment the one album he released while alive. The $8,1000 target to do so was collected within 30 days!

Tonight, the result! The Secret Songs of Sam Larkin will be released with a cast of stellar performers at TO’s Tranzac Lounge starting at 7 p.m.

Why this event wasn’t being assiduously promoted at the just-past Winterfolk Blues & Roots Festival is a head-shaking boggle to my mind, because it contains a cast of people who could easily put on their own Roots festival, and in fact are tonight —sort of.

The 12-track album itself, produced by Bob Wiseman of Blue Rodeo and cult-Folk fame, is an outgrowth of the recording project Larkin started himself back in 2009, according to a promo for the disc on You Tube, and includes the musical participation of Meg Tennant, Drew Smith, Ben Bootsma, Tom St. Louis, Laska Sawade, Mark Hundevad, Christine Bougie, Burke Carroll, Ernie Tollar, Nicolas Buligan, Sarah Fraser-Raff, Laura Bates, Tony Allen, Mark Roy and Wiseman. Whew!

You can actually listen to one of the tunes from it on the website of excellent Canadian indie magazine exclaim.ca. “Nuclear Waste” sounds to these ears like the product of a jam that Leonard Cohen, Harry Chapin, John Prine, Tom Waits and Phil Ochs might have held together —in other words, absolutely awesome.

Why this 7-10 or-11-or-so event is being held in the rather smallish Southern Comfort Room of the multi-venue club at 292 Brunswick St. in TO’s Annex area (and seemingly jammed in before an open mic night) is another puzzler —I think it would have made a lot more sense and better respected the augustness of the occasion to have moved both events into the Main Hall for the night, with the celebration party segueing/morphing into the open mic in the most natural of ways possible.

I’ll be shocked if there’s not overflow at the club given the momentousness of the event and significance of the accomplishment. I’d suggest arriving early if you want to be part of this historic moment!

P.S.: If you enjoy and find this sort of reporting to be meaningful and important, please support this publication by becoming a subscriber [see Membership Tab for details]. I need the support of the GTA musical community to keep this publication happening.

Contact me at [email protected] with any questions or to arrange alternate methods of subscription payment or donations.