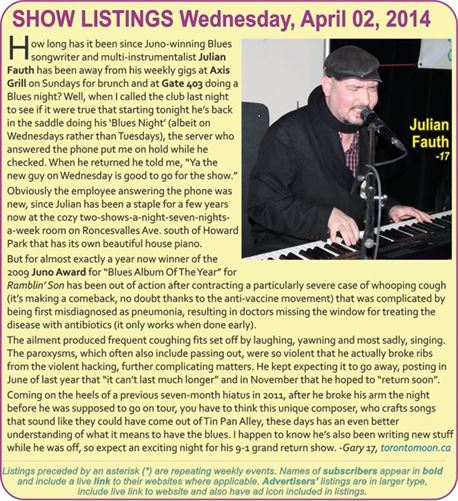 How long has it been since Juno-winning Blues songwriter and multi-instrumentalist Julian Fauth has been away from his weekly gigs at Axis Grill on Sundays for brunch and at Gate 403 doing a Blues night? Well, when I called the club last night to see if it were true that starting tonight he’s back in the saddle doing his ‘Blues Night’ (albeit on Wednesdays rather than Tuesdays), the server who answered the phone put me on hold while he checked. When he returned he told me, “Ya the new guy on Wednesday is good to go for the show.”

Obviously the employee answering the phone was new, since Julian has been a staple for a few years now at the cozy two-shows-a-night-seven-nights-a-week room on Roncesvalles Ave. south of Howard Park that has its own beautiful house piano.

But for almost exactly a year now winner of the 2009 Juno Award for “Blues Album Of The Year” for Ramblin’ Son has been out of action after contracting a particularly severe case of whooping cough  (it’s making a comeback, no doubt thanks to the anti-vaccine movement) that was complicated by being first misdiagnosed as pneumonia, resulting in doctors missing the window for treating the disease with antibiotics (it only works when done early).

The ailment produced frequent coughing fits set off by laughing, yawning and most sadly, singing. The paroxysms, which often also include passing out, were so violent that he actually broke ribs from the violent hacking, further complicating matters. He kept expecting it to go away, posting in June of last year that “it can’t last much longer” and in November that he hoped to “return soon”.

Coming on the heels of a previous seven-month hiatus in 2011, after he broke his arm the night before he was supposed to go on tour, you have to think this unique composer, who crafts songs that sound like they could have come out of Tin Pan Alley, these days has an even better understanding of what it means to have the blues. I happen to know he’s also been writing new stuff while he was off, so expect an exciting night for his 9-1 grand return show. -Gary 17, www.torontomoon.ca